I’ve now read three Warhol biographies–well actually four: The first was the 1989 version of Victor Bockris’s Warhol biography entitled “The Life and Death of Andy Warhol”. Next I borrowed Bob Colacello’s “Holy Terror – Andy Warhol Close Up” (1990) from my local library and soon realised I needed my own reference copy. The third was Wayne Koestenbaum’s 2003 “Andy Warhol”. But then I read a review somewhere that told me that Bockris had updated and expanded his 1989 bio in 2003 for the 75th anniversary of Warhol’s birth and simply called it “Warhol”. So I invested in a copy and reread Bockris’s account.

There is no doubt that Bockris’s biography is the most detailed story of Warhol’s life and artistic development and I recommend the 2003 edition as the most detailed. Colacello’s book also tries to describe Warhol’s background and early years but its main interest is in the period from 1970 to 1981 when Colacello was Andy’s employee and confidante and hustler–constantly being nagged to convince potential customers to order Warhol to paint their portrait.  Koestenbaum’s, is the shortest of the biographies, and includes a description of Warhol’s early life, but I get the impression that he’s read Bockris. Koestenbaum is a fan of Warhol’s films and most of his book extols the virtues of sitting for hours watching them or re-watching them until one is hypnotised.

Bockris tells how Andy Warhol was introduced to silkscreening. Coincidentally, the day before I read Bockris’s account, I saw a BBC documentary on Robert Rauchenberg. I knew next to nothing about this other founding member of American Pop Art and realised I have really missed out on seeing his art. The only Rauchenberg work I know is “Monogram”–the stuffed goat with a tyre round its middle standing on a collage floor. I had no idea he was working with silkscreens before Warhol got the idea. I didn’t know either that he was gay and had had a relationship with Jasper Johns…

Warhol moved house many times in New York; first living in cockroach-infested, cold-water flats in various locations. In 1952 he rented a fourth floor flat at 242 Lexington Avenue and in the spring his mother, Julia, moved in with him as his housekeeper. They slept on mattresses on the floor of the single bedroom. then Andy rented the flat on the second floor of the building, above Shirley’s Pin-Up Bar night club, leaving Julia in the fourth floor flat. Andy was using his living room as his studio with the TV on and his stereo blaring the day’s pop record on repeat. He had hired his first assistant, Vito Giallo in 1954, introduced by Nathan Gluck, who the following year, would take over as Andy’s assistant.

Well, back to Warhol and silkscreens. Warhol always wanted to be accepted as a proper artist, but was generally regarded as a commercial artist and was having difficulty getting his art shown in galleries. He had approached Leo Castelli , who represented both Rauchenberg and Johns but had been rejected. Fast forward to 1962. Andy’s Cambell’s Soup Can paintings had aroused a lot of media attention, even before they had been shown in a gallery (in fact they were first shown in Los Angeles in July 1962).

Elinor Ward, owner of the Stable Gallery, who represented, among others, Cy Twombly and Robert Indiana, wanted to meet Andy. She was taken to his apartment by the art critic Emile de Antonio. Ward offered Andy a show in her gallery on one condition–according to Bockris, she took out her lucky two dollar bill, and waving it in Andy’s face, said that she’d give him a show if he painted the bill. All Andy replied was “Wow!”

Andy had painted Coke bottles and Campbell’s soup cans and was looking for a way to be able to reproduce images faster than painting them. So in July, as Andy was trying to find a way to reproduce a hundred dollar bills, Nathan Gluck suggested he use silkscreens.  He immediately revisited some of his earlier subjects, Elvis, Troy Donahue, Warren Beatty and Natalie Wood and made silkscreens with several images of his idols on each. Then, on 4th August 1962, the same day his Soup Can show closed in Los Angeles, Marilyn Monroe died. Andy immediately decided to paint a series of portraits of her, using Gene Korman’s photo of her from the film Niagara as his subject and over the following months he produced 23 portraits in various colour combinations. First he painted a coloured background, then he sketched an outline by projecting the image onto the background and painted in eye shadow and lipstick and then he silkscreened the black and white image onto the prepared canvas.

Thus was born Warhol’s modus operandi for the rest of his career. In the future, he would take a photograph (or he would find a stock photo) of the subject to be portraited. He would take the photo to a printer who would blow the photo up to the required size (usually 40 x 40 inches) and make an acetate from which a silkscreen was prepared and Andy–or rather some assistant, with or without his help–would make the final painting or print. In effect, Andy’s only contribution to the process was either taking or choosing the photograph used in the work.

Then–just as Rauchenberg, did–he would store the screens so that they could be re-used later. Andy did this in the eighties when he made a series of “reversal” paintings, re-using the Marilyn screens to make a series of negative portraits. Now, the fact that Andy kept old screens may shed light on another series of artworks, namely his 1963 “Giant Size $1.57 Each” record covers. He collaborated with Billy Klüver on producing the original edition of 75 signed an numbered copies on white record cover stock. There are four further series, each of 75 copies on spray painted record sleeves. The covers were sprayed in red, green, orange and yellow paint and then silkscreened with the “Giant Size” image. These were released for sale in 1971. It is my guess that it was probably Klüver’s idea to remake the series as he seems to have been responsible for selling at least some of them. It is thus completely possible that he–or Andy, or one of Andy’s assistants–made the second batch of covers using the original screen, particularly as these were often unsigned and unnumbered.

Andy Warhol produced the “Giant Size $1.57  Each” sleeve in five variations with the help of Billy Klüver, who had recorded the interviews with the artists involved in the “Popular Images” exhibition at the (now defunkt) Washington Gallery of Modern Art that ran from 18th April until 2nd June, 1963. The exact history is not known. A first edition of 75 sleeves with black image screened directly onto the coated stock record sleeve, each signed and numbered on verso was produced in 1963. He could even have printed the coloured covers at the same time or, having saved the screen, made them in 1971. Editions of 75 copies each, silkscreening the black “Giant Size” image onto sleeves that he had first spray painted. There were yellow, green, red and orange editions. These were sold in 1971.

Many covers have included the record from the “Popular Images” exhibition, possibly because Billy Klüver had a stock of the LPs. The record, comprising interviews with all eleven artists whose works were shown at the exhibition was recorded by Billy Klüver and originally came in a cover designed by Jim Dine. It seems, however, that the “Giant Size” cover was not shown at the exhibition.

Copies of the cover with or without the record have changed hands for anywhere between $10,000 and $20,000, making them unattainable for most collectors of Andy Warhol’s record sleeve art.

However, the technique should be easy to replicate and the “Giant Size $1.57  Each” image is easy to find and reproduce. All that is needed is the right materials. Sufficient 12-inch record sleeves, spray paints, a silk screen and emulsion for transferring the image from overhead film to the screen. Then acrylic paint to screen the image onto the pre-prepared covers. 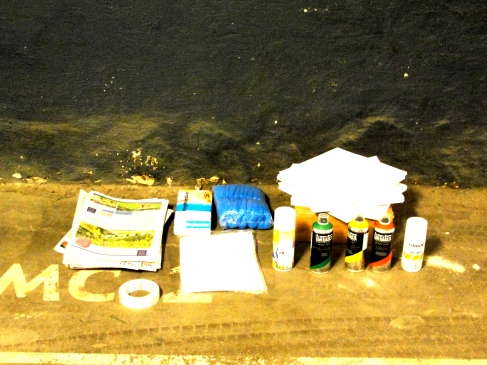 So, having foraged for all the materials I set to work and spent 2 1/2 hours spraypainting record sleeves in the four colours.

Until all four colours were sprayed.

I had put my name down to go a silkscreen course and was one of six “pupils” to participate on the weekend of October 12-13th. I intended to make ten sets of five covers and silkscreen the “Giant Size $1.57  Each” design onto two T-shirts.

Then I got down to silkscreening the covers, beginning with the yellow ones. Orange, green and red covers followed and finally, when had learned the technique better, I screened the white, unsprayed sleeves. I had ordered 50 covers – so no room for error. Unfortunately there were a few poor screens so I will need more covers to complete the ten sets I had planned.

The five members of our informal Warhol Cover Collectors Club have contributed to the production of these covers and will each receive a set of all five colours,