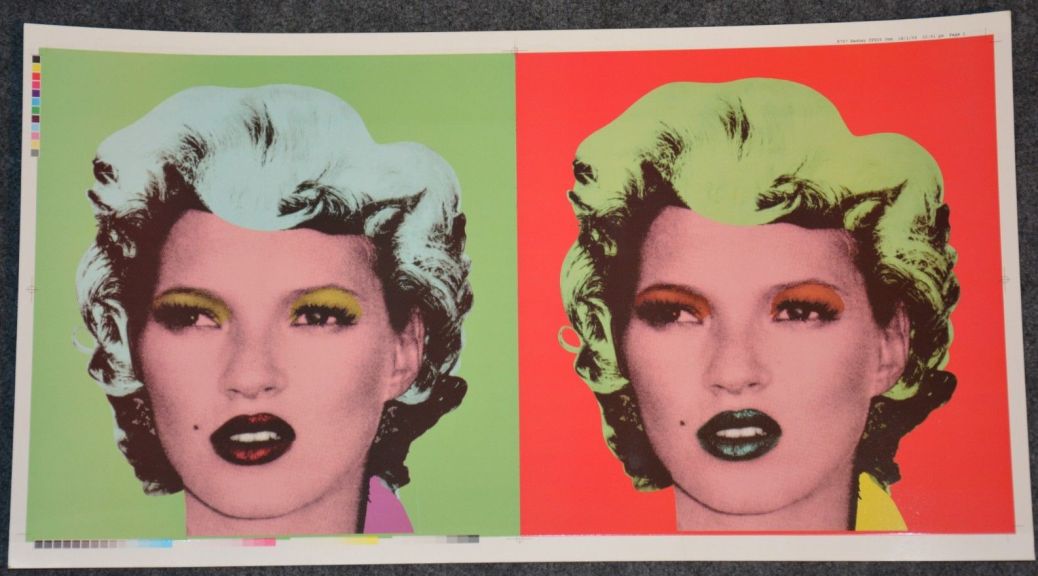 You already know that I am inordinately proud of my collection of records and CDs with cover art by the artist known as Banksy. Many of the vinyl releases with Banksy‘s cover art, particularly the “unofficial” ones, were released as limited editions. Dirty Funker (just one of DJ Paul Glancy‘s aliases) released two remixes as 12-inch singles with cover art by Banksy: “Let’s Get Dirty“, from 2006, appropriated Banksy‘s famous Kate Moss portrait, and “Future“, released in 2008, featured Banksy‘s “Radar Rat” design (in five different limited edition covers, probably each of 1000 copies). 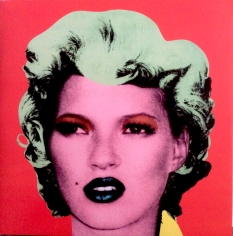 a. Front of first pressing of Dirty Funker’s “Let’s Get Dirty” 12-inch single. 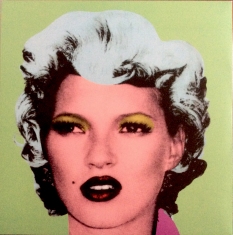 b. Back of first pressing of Dirty Funker’s “Let’s Get Dirty” 12-inch single.

There were two editions of the “Let’s Get Dirty” 12-incher, both limited–the first edition, which showed only Banksy‘s Kate Moss portrait with no artist, title or tracklisting, or even a barcode. The front image showed Kate‘s head against a red background, while on the rear cover she had a pale green background. This edition must have been significantly more limited than the second edition which showed Kate‘s portrait with a Dymo strip over her eyes on the front cover giving the artist and record’s title. On the rear the strip was placed over Kate‘s mouth giving the tracklisting. 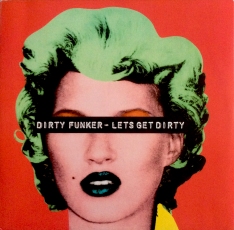 a. Front of second pressing of Dirty Funker’s “Let’s Get Dirty” 12-inch single. 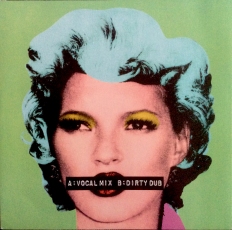 b. back of second pressing of Dirty Funker’s “Let’s Get Dirty” 12-inch single.

This week a printer’s proof of the first edition “Let’s Get Dirty” cover was advertised on Ebay. The seller had bought it in 2007 and now was sadly selling it. He thought there might have been about ten copies printed in 2006 (the print is dated 18th January 2006) and makes an interesting addition to both my Banksy and my collection of record and CD covers featuring Kate Moss. 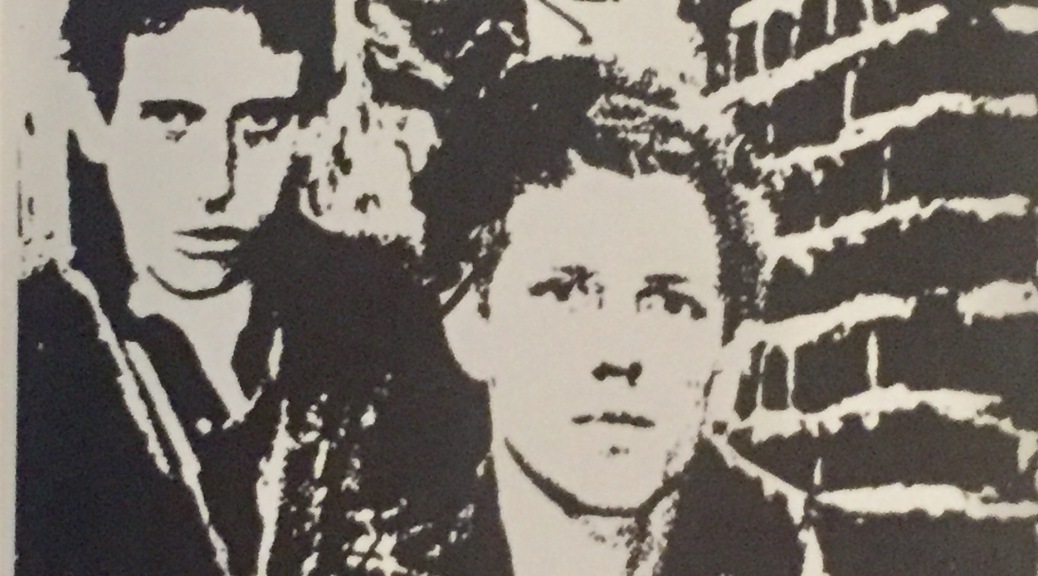 Gröna Lund is a permanent attraction in Stockholm with exciting rides, restaurants, bars and an important concert stage on which most of the world’s more famous artistes–ranging from Birgit Nilsson via Chuck Berry to The Clash–have performed.

Posters for events and concerts at Gröna Lund have become highly collectible. Between 1971 and 1988 they were designed by one man, Nils Sture Jansson–who produced about 800 individual posters, sometimes with incredibly short deadlines. In 2012 Premium Publishing produced a book containing 200 of Nils Sture Jansson’s poster designs edited by Nils Sture Jansson’s son, Jonas, and Gröna Lund’s own historian Andreas Theve. The book rapidly sold out when it was published–but I was lucky to find a copy in Söders Bokhandel– a little, but extremely well-stocked bookshop in Stockholm. The book has  also become highly collectible.

Nils Sture Jansson’s relatively simple illutrations capture the spirit of the artists and, according to the introduction, were much admired by them. Only a few were unhappy–and that was sometimes due to the fact that his or her name was misspellt.
Here are some samples (posters for artists I personally like): 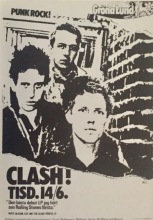 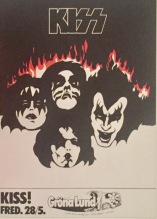 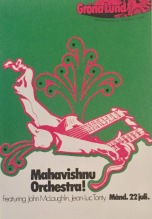 Jansson would be supplied with photos of the artist(s) and deconstruct them to make his poster designs.

Kristian Russell has taken over and is continuing the tradition of Gröna lund posters. 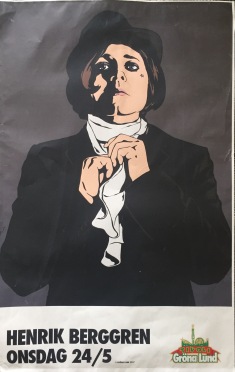 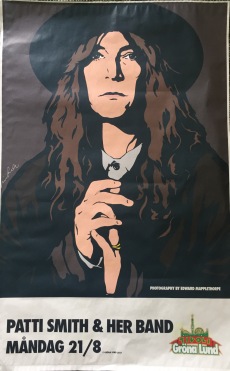 I’ve divested myself of the majority of my concert and art posters but have kept a few that I particularly like. When I sold my record and poster collection, the buyers, knowing that I collect Klaus Voormann’s record cover art promised me a signed, numbered edition of Klaus Voormann’s portrait of John Lennon. I collected it the other day.

It joins my signed Banana poster from 1981-2. Nationalmuseum in Stockholm presented a huge exhibition of record cover art from 27th October 1981 – 17th January 1982. This was the year before the CD was introduced so all covers were of vinyl releases. I still have the exhibition catalogue from the Nationalmuseum’s exhibition – which has the Velvet Underground & Nico LP design on its cover. The catalogue has an eight page review of Warhol’s cover art and pictures six covers (two Kenny Burrell, one Johnny Griffin, Two Rolling Stones and – the obligatory – Velvet Underground & Nico) written by Bo Nilsson. This must be the first anaytical review of Warhol’s record cover art that I ever read. Of course, only a few warhol covers were recognised in 1981, so the choice of these six is hardly surprising.

I felt that the covers in the exhibition were arranged rather haphazardly and I wrote a three-page letter to Nationalmuseum suggesting how the covers could have been better presented. I did not expect a reply, but one came by return informing me that the exhibition was moving to Umeå’s Bildmuseum and that the museum would contact me to discuss which covers should be included. They did, too! and about thirty of my covers were included in the Umeå exhibition.

In 2008, as discussions about putting on the “Happy Birthday Andy Warhol” exhibition in Piteå were underway a copy of the poster for the Nationalmuseum’s record cover exhibition came up for sale. This was a one-off and beautifully signed by Andy Warhol in pencil. So it was included in the Piteå exhibition and has since then hung on my wall.