In 2020, just when the Covid-19 pandemic was hitting hardest my friend Romain Beltram invited me to show some of my paintings in his Triphopshop gallery in central Stockholm. He already showed some of Iron’s work and for a month from 9th September Iron was to have an exhibition of his work at restaurant Riche — one of Stockholm’s hip places. The exhibition, curated by Carl Carboni och Lars Liljendahl, was centred around Iron’s portrait of Chinese president Xi Jinping as Bat Man — playing on the theory that the Covid-19 pandemic that started in Wuhan, China, might have spread from bats. Thus Iron portryed Xi Jinping as the Bat Man.

However, the exhibition was rapidly closed after complaints from the Chinese Embassy in Stockholm, objecting to the portrayal of the country’s president in this manner. Iron became an instant hero!

He has also satirised Ronald McDonald as the fast food chain has been accused of being resposible for the increase in obesity in recent decades. Iron has portrayed Ronald begging for forgiveness.

I have also a unique painting by Iron. He has reimagined the cover of John Lennon’s and Yoko Ono’s Double Fantasy LP cover.

I think the cover art is really striking and puts a “punk” feeling on the design, which I like.

Street art has become mainstream. Street artists are increasingly in demand as commercial artists and recording artists are turning to these readily identifiable painters for cover art for their recordings. In America, Jean-Michel Basquiat, Keith Haring and  designed record covers in the eighties, and Shepard Fairey, Robert del Naja (aka 3D) and Banksy (the latter two in the UK) produced covers mainly from the nineties onwards.

Covers by Basquiat and Fairey‘s art covers are very collectible and many are currently very expensive as they were produced in limited editions. Vinyl covers with Banksy designs are also rare and command high prices. I was lucky enough to start collecting Banksy’s record cover art relatively early and have managed to collect what I consider to be a complete collection of his record cover art. Thierry Guetta–better known as Mr. Brainwash–is a more recent street artist to design record sleeves. So far I have only been able to identify three such covers; all for Madonna. He designed the cover for her 2009 compilation “Celebration” which was released on vinyl as a 4 LP set in a gatefold cover. 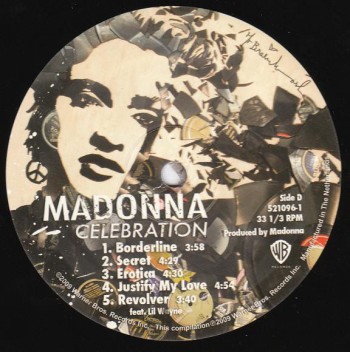 There is also a 12″ EP of “Celebration” remixes.

Then there are a variety of CD releases. The standard double CD uses the same Mr. Brainwash image as the LP set, but there is a slightly different (more anemic) variation also.

And the 12″ picture disc and CD singles hare the same artwork:

A couple of other records turned up when I searched http://www.discogs.com for other cover art by Mr. Brainwash and I fell for one that I thought probably was by him–Travis Barker‘s “Give the Drummer Some“: 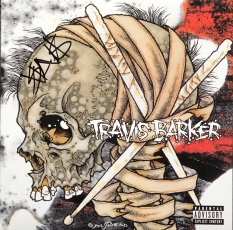 Travis Barker’s “Give the Drummer Some” LP cover front. 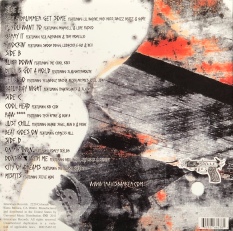 Travis Barker’s “Give the Drummer Some” LP cover rear.

Unfortunately, this cover is NOT by Mr. Brainwash but is by Pushead (aka Brian Schroeder, who, according to Wikipedia, is a graphic designer and record label owner.) More of his designs may be seen here. Skulls seem to be his speciality!