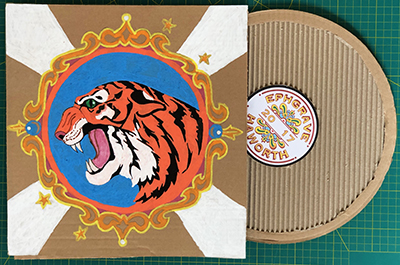 When I was preparing an exhibition of Peter Blake’s record cover art at Piteå Museum in northern Sweden in 2009, I realised that Peter Blake had all but taken over responsibility for the design of the Sgt. Pepper’s Lonely Hearts Club Band album cover. I wondered how his ex-wife and co-designer Jann Haworth felt about this and contacted her and we began a correspondence. She acknowledged that she has been marginalised. In 2017 the BBC published an interview with her entitled Jann Haworth: The forgotten creator of the Sgt. Pepper cover. we discussed the inequalities that appeared in retrospect about the characters featured on the cover. Why were there so few people representing ethnic minorities, so few women? Obviously, the cover was a product of its time and these questions were only being formulated in the sixties. Jann, now living in Salt Lake City, Utah, U.S.A., has since tried to address this and has produced a large mural called SLC Pepper.

Haworth has also produced a seven-panel womens’ mural that has been shown in various locations around the world.

During a more recent exchange of emails, Jann told me she had been searching for news of Joe Ephgrave, the artist who painted the Sgt. Pepper drum. He had been a friend of hers and Jann had one of his paintings, of a tiger, on her wall back in the sixties. I asked Jann if she had designed any other covers after the Sgt. Pepper cover. She had not done any covers for real records but in 2017 had taken Joe’s tiger design and produced a painting in the form of a record sleeve.

She had made two copies, one in Salt Lake City and the other in Denver, Colorado. And, realising I wouldn’t be able to get one of these, I decided to make my own. First I downloaded the cover picture and sized it in Photoshop and printed it on supersized A3 paper. Then using graphite paper traced the design onto a sheet of wellpap. 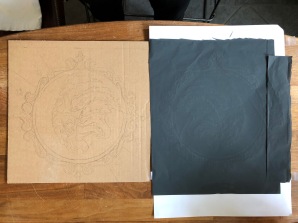 The tracing from graphite paper to wellpap.

The A3 print and my inital painting of the tiger.

Then using acrylic paints I finished my version of the cover picture. However, I had a problem with the record label, which proved much more difficult to copy accurately. I mentioned this to Jann and she kindly helped me by mailing me the design.

This saved me an enormous amount of work! making the wellpap “record” took some time and then calculating the size of the label was tricky. Finally, my copy was ready.

This “artwork” is an homage to both Jann Haworth and to Joe Ephgrave. Perhaps not as professional as Jann’s original, but made with gratitude and in the knowledge that it’s unique.

I described the 50th anniversary box set of “Sgt. Peppers Lonely Hearts Club Band” in a post in July 2017. Way back in 2008–2009, when I was preparing an exhibition of Sir Peter Blake’s record cover art, I felt that Jann Haworth, his former wife and co-designer of Blake’s most famous cover, had almost been forgotten. Whenever one reads about Peter Blake, in articles or exhibition catalogues, he is invariably introduced as “the designer of the Sgt. Pepper cover”. Indeed, he has said that this is “an albatross sitting on his shoulder”. So I contacted Jann and she was most helpful providing details of the construction of the Pepper set up and even sent pictures. She also agreed to sign my copy  original “Sgt. Pepper’s Lonely Hearts Club Band” LP that Peter Blake had previously signed.

We discussed the gender and racial imbalances of the figures represented on the cover and Jann told me this was something she had been thinking about and tried to redress in a “Pepper” mural in her home town of Salt Lake City, Utah, U.S.A.

In late 2018 I bought a copy of the 50th anniversary “Sgt. Pepper” LP signed by Sir Peter Blake at a gallery in Liverpool. I thought it would be cool to have this anniversary album signed by both Blake and Haworth, so I contacted her again. She was more than happy to help out and I didn’t waste a moment before posting the record and a couple of other “Pepper” covers to the address I had been given ten years before. I should have checked Jann’s address before posting as it transpired she had moved from the old address. Despite her efforts to trace the parcel it was never delivered to her but found its way back to me in January 2019. So, I repackaged the covers and, after confirming Jann’s address, sent them again.

Jann was busy painting two new murals and had a deadline to keep, so the covers sat with her until the end of March. They arrived in mid April. Jann had signed nine items:
1. The 2017 Pepper anniversary LP signed previously by Peter Blake,
2. The Album cover from the 2017 box set containing four CDs, a DVD & a Blu-Ray disc
3. All four of the CD covers from the above,
4. The stage set from the Japanese 50th anniversary box set, and
5. The cover of an old 1967 copy of “Sgt. Pepper”.
6. The insert from the above.

The four CDs from the 50th anniversary box set.

In the package was a handwritten letter describing the soft figures she made for the Pepper cover. She had made the Shirley Temple doll in 1965 or 1966 and, on the cover, it was sitting in the lap of an old lady. I had never really noticed the old lady–and I suspect few other people had either. The old lady, Jann told me,was modelled on a photo of her great grandmother, a seamstress who had been widowed early and had to raise two children on her own.

Since the arrival of the signed records Jann has kept me informed of some of her current projects, including a joint “Work in Progress” mural with her daughter Liberty Blake. This mural is in seven panels and has been shown in several museums.

I recently asked her if she had been involve in any other designs for record covers and it transpires that she has produced one other–a limited edition artwork.

Jann told me of her work with Joe Ephgrave, the fairground painter who painted the drum om the “Sgt. Pepper” cover. He painted different versions of the Pepper title on each side of the drum. The one we are all familiar with, and another version that he considered “more modern”, that I had not seen until now.

Joe was paid £25 for the drum painting and disappeared soon afterwards. Internet searches have failed to find any information about him–and there are suggestions that he never existed! However, Jann has scotched that rumour. She has taken Joe’s painting of a tiger and produced a record cover of sorts. In July 2008 the “Pepper” drum was sold at Christie’s for £541,250 ($1.07 million).

To almost round off my collection of the 50th anniversary issues of “Sgt. Pepper’s Lonely Hearts Club Band” releases I added the limited edition picture disc to my collection.

The only version of the 50th anniversary issues of “Sgt. Pepper’s Lonely Hearts Club Band” releases I don’t yet have is the double LP version. Perhaps I’ll try to get that some day.