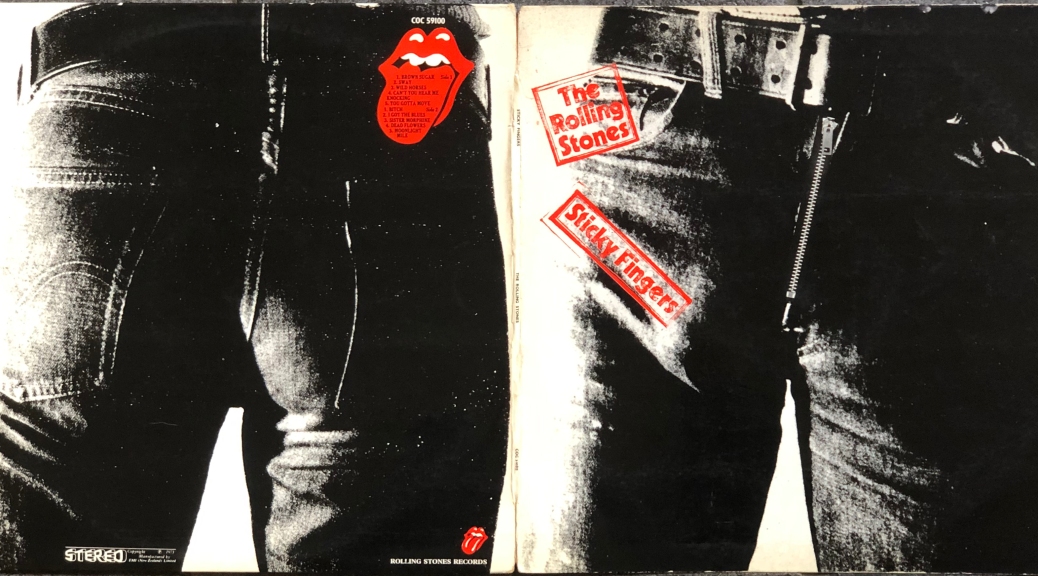 Sticky Fingers was the Rolling Stones eighth full length U.K. album, released on April 23rd 1971. And when you ask anyone with any interest in record design what record covers did Andy Warhol design the answer will generally be: the Banana cover (The Velvet Underground & Nico) and the one with the zip.

Andy Warhol had the idea to design a record cover with a working zip. He photographed one of his associates’, Jed Johnson ‘s jeans from the waist down to the mid thighs Some say it was Joe Dallesandro, but I disagree). He also photographed someone wearing jeans from the rear. No one is exactly sure who’s rear this was. Once Warhol had designed and photographed the cover images and the underpants hidden under the front cover, Craig Brown put the package together including the inner sleeve. An additional design first was the inclusion of John Pasche’s tongue logo, the first time this appeared anywhere.

The album was released in the United Kingdom with the band’s name over the right hip pocket and the title on the right thigh. In the United States both title and band name were placed on the belt towards the right.

Some people have manged to separate the right edge of the front cover to allow it to open and reveal the underpants beneath and called this a gatefold cover. However, the only true gatefold version was produced in New Zealand in 1973, with the record being inserted from inside the gatefold as opposed to the normal top insertion on all other issues. In addition this cover had a printed, non-functioning zip.

There are variations of the zip, too. The standard zip has a small pull tag. There were a small number of early U.K. pressings with a larger pull tag, the Pan tag (as PAN is inscribed on it), and there is apparently a third variation on the U.K. version with the STAR pull tag. I’ve never seen one of those, but there’s a picture on Discogs.com.

The standard zipper on German pressings of the album had a much larger pull tag, similar in shape and size to the Pan tag.

Several reissues of the Sticky Fingers album have appeared over the years, many of which, like the New Zealand gatefold mentioned above, have had printed, non-working zips. There are a couple of special issues that are worthy of note here: in 2015 Polydor Records released an expanded version as a limited edition double LP with working zip with John Pasche’s tongue design as the zip’s pull tag. In 2020 the company reissued the original album half-speed mastered and pressed on 180g vinyl, but the cover of this album had a printed, non-functioning zip.

There a re myriads of variations of the Sticky Fingers cover released in other countries. I do not collect these but I do have all the variations described in this short post in my collection, bar the U.K. PAN zip pull version. I am not sure I need to include that as well.