I’ve culled my bookshelves quite mercilessly over the past few years but have jealously guarded many of my “art” books. One of these is Martin Aston’s Facing the Wrong Way — The Story of 4 A D. I’ve been staring at the book’s spine for yonks but only started to read it a couple of weeks ago. It rekindled my interest inall things 4*A*D.

I am a big fan of record cover design and fastened for the work of 23 Envelope, and, later, v23 in the early eighties when I bought a Cocteau Twins album — probably Head Over Heels — in Camden Market. I was struck by the cover and shortly after bought a folder of posters by the design team called 23 Envelope; Vaughan Oliver and his longtime friend photographer Nigel Grierson. I still have it.

Thus started my collection of Vaughan Oliver’s art; primarily record covers from 4*A*D. Over the years up until 2013 I built up a collection that included most of the more desirable record covers and books. I had the original This Rimy River book — a catalogue (of sorts) of an exhibiiton at the Pacific Design Center in Los Angeles in 1994.

My collection of 4*A*D rarities included two copies of the Lilliput double CD album, the deluxe LP version of Lonely Is an Eyesore as well as the wooden box version, a limited edition of 100 boxes, intended for the artists on the 4*A*D label. Although fifty were on general sale when it was released in 1987.

I had sent my copy of Rick Pointer’s book Vaughan Oliver: Visceral Pleasures to Vaughan sometime in late summer of 2001 with a letter asking for a signature, but I hadn’t heard anything from him. I was going to London in November 2001 and I therefore planned a visit to v23’s studio in south west London. So I packed the lid from my Lonely Is an Eyesore box, my copy of limited edition of This Rimy River and a copy of the Lilliput CD album in the hope that he would sign them. I popped down to the studio one day but neither Vaughan nor Chris Bigg were there, so I left a business card. I returned mid morning on, I think, the 16th, and Vaughan welcomed me as the weird Swede, having seen my business card. We had a chat and I aasked him about my Visceral Pleasures book, which he immediately produced and signed.

I showed him the other stuff I had with me and he graciously signed everything! Then Chris Bigg reminded him they had a lunch meeting at 4*A*D to re-negociate their contract! So Vaughan suggest I pop to the local pub and grab some lunch and then have a look through v23’s poster archive to see if there were any posters I would like. I picked about 20 which Vaughan gave me when he and Chris returned from their meeting.

I sold most of my 4*A*D / Vaughan Oliver collection in 2013. probably the only part of my extensive record and poster collection that I today regret parting with. However, I have catalogued my complete record collection online and can view all the 4*A*D records and CDs I had had. And, of course, I can listen to them on Spotify.

Vaughan Oliver died in December 2019, a year after his magnum opus Vaughan Oliver: Archive – a two-volume resumé of his career was published. I’m ashamed to say, I only found out about it recently. It’s a limited edition and very difficult to find now.

So all I have left of my Vaughan Oliver collection are the 23 Envelope posters, Pieter Nooten’s LP Sleeps With the Fishes (that I consider the most beautiful v23 cover), the limited edition of This Rimy River and the little paperback Vaughan Oliver and v23 Poster Designs, published to celebrate 4*A*D’s 25th anniversary. I shall treasure them all.

Thank you Martin Aston for rekindling my interest in all things 4*A*D.

Two record cover and poster designers that have inspired me both in my art and in my collecting have died recently. Vaughan Oliver, famous for his record covers, primarily for 4AD, and posters died on 29th December, 2019 just 62 years old.

Flashback–It’s 1967-8 and I’m a medical student at Guy’s Hospital in London. On Saturdays I would walk along Kings Road in Chelsea visiting hip boutiques and girl watching. Somewhere along there I bought some Fillmore Auditorium and Avalon Ballroom handbills and in a record shop at World’s End bought “The Psychedelic Sounds of the Thirteenth Floor Elevators” and the band’s second album “Easter Everywhere” (with the lyric sheet included). The handbills cost two shillings to half a crown in those days, which was quite a lot of money (10p/15p in modern parlance by with considerably greater buying power). Eventually I had collected more than forty by the likes of Victor Moscoso (ten), Stanley Mouse (four), Rick Griffin (four) and, of course, Wes Wilson (fourteen).

I was on the entertainments committee (not actually a committee, just some students who wanted to organise parties) at the hospital’s Student’s Union and together with fellow medical student Andrew Batch, painted posters for rave-ups that we called Inflam. My posters were heavily influenced by the psychedelic posters I had found on the Kings Road. We painted four copies of each poster to hang on the various notice boards around the Hospital and they attracted quite a lot of attention. I offered one to the shop Gear on Carnaby Street, which they we willing to buy for £25, but I thought that was too cheap, so I (idiot) refused the offer.

I still have my handbills, all 41 of them.

I did actually qualify despite my partying and actually practiced as a doctor doing my various junior posts in London and Norwich, all the while collecting records and posters. many of which I ripped from walls around London. Records with great cover art predominated even if there were many soul records. I had first editions of Sgt. Pepper’s Lonely Hearts Club Band, Their Satanic Majesties Request, Grateful Dead, Jefferson Airplane, Big Brother & The Holding Company, Country Joe & The Fish, Doors and Neil Young records and even bought Velvet Underground & Nico and White Light/White Heat.

Fast forward to the eighties. I discovered Victorialand, a Cocteau Twins album with cover art by 23 Envelope and thereby discovered 4AD records and began an almost obsessional race to collect album covers by Vaughan Oliver and 23 Envelope (Oliver‘s cooperation with Nigel Grierson) and v23 (his collaboration with Chris Bigg and others). I collected posters, calenders, 4AD catalogues and even had a little brass 4AD pin (I wonder what happened to that?) In the end my Vaughan Oliver collection included all the 4AD rarities, including the wooden box version of Lonely Is an Eyesore. My 4AD records went when I had to sell my collection, but I still have the first cover Vaughan designed for the company — the  of Modern English‘s Gathering Dust seven-inch single.

I bought a folder of fifteen 23 Envelope posters for £9.99 that I still have and also bought the softback This Rimy River (which went with my record collection), however I still have the limited edition of This Rimy River (No 65 of 400) which I took with me to v23‘s office/studio in November 2001 and got Vaughan to autograph it for me. He also signed Rick Poyner‘s book Vaughan Oliver: Visceral Pleasures, and the lid of of my Lonely Is an Eyesore box.  I arrived at v23 at around 11 a.m. and introduced myself and started chatting about my collection. Suddenly it was lunchtime and Vaughan and Chris Bigg suddenly remembered they had an appointment at 4AD to re-negotiate their contract. So the suggested I look through their poster archive and then pop round the corner for some lunch and they’d come back after their meeting. Vaughan let me take a selection of posters from the archive as a souvenir of my visit. 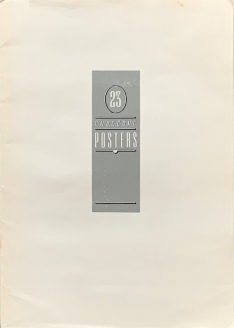 The cover of the 23 Envelope poster folder. 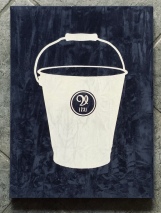 The limited edition of This Rimy River.

I am deeply grateful to both these artists for the inspiration their work has given me.