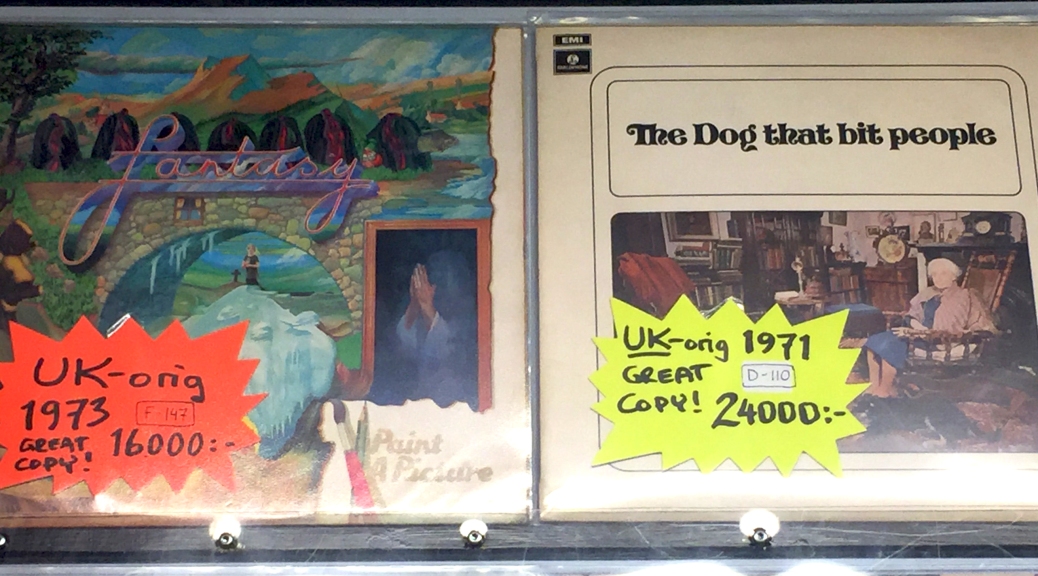 I knew, of course, that records by The Beatles could command exorbitant prices–I actually once owned some of the rarest Beatles items including both the stereo and mono versions of “Please Please Me” with the black and gold Parlophone labels, and an autographed copy of “Love Me Do“, signed on the day after its release in October 1962.

But that albums by bands that I had never heard of could be that expensive was a surprise. Obviously, these albums are in demand for the music they contain. But in recent years prices for records whose cover art is by a famous artist have also rocketed.

Wikipedia has published a list of the “most valuable records of all time” sourcing Record Collector magazine, Popsike, Ebay and others (https://en.wikipedia.org/wiki/List_of_the_most_valuable_records). Number one is, to my surprise a copy of The Wu Tang Clan‘s LP “Once Upon a Time in Shaolin“. Only one copy was pressed and it apparently sold to a hedge fund manager for $2 million! The recent sale of Ringo Starr‘s copy of The Beatles‘ “White Album” for a mere $790,000 pales in comparison!

In August 2016 a copy of an obscure EP by a band called Skyline was sold on Ebay for $1,500. The EP was released in France in 1978 and it was only in 2015 that Warhol collectors Guy Minnebach and Raimund Flöck recognised the cover image as a still from one of Warhol’s 1964 screen tests featuring Susanna de Maria, and added it to their lists of Warhol record covers. Apparently, this EP is a cult disco rarity and was expensive even before the Warhol association was recognised.

Prices of the records with cover art by Andy Warhol from the 1950s have generally increased considerably in value. I believe that the publication of Paul Maréchal‘s book “Andy Warhol: The Complete Commissioned Record Covers 1949-1987” has played a part in making the early, rarer covers more valuable. It has stimulated interest in this aspect of Andy Warhol‘s work and more collectors searching after a limited number of records means inevitably that prices will rise. However, less scrupulous sellers try to sell records with Warhol art from the 70s and 80s for inflated prices despite the fact that they are generally easy to find quite cheaply if one is prepared to search a bit.

I started collecting record cover art by Banksy in 2008. Covers were then easy to find and not overly expensive. The most expensive covers I bought included a copy of the first pressing of Dirty Funker‘s “Let’s Get Dirty” which cost £100 and two copies of the “Peace Not War” CD that was given away with the February 2008 issue of the magazine The Big Issue for about £40 each. The value of these has more than doubled. CDs with Banksy cover art can still be found at very reasonable prices, it’s the vinyl versions that seem to be most sought after and all have become expensive.

It is still possible to collect a complete collection of records with cover art by Sir Peter Blake for a modest sum. One might have to settle for a modern reissue of the “Sgt Pepper’s Lonely Hearts Club Band” LP to keep costs down, but otherwise it should be possible to collect most of his 24 covers for around £600. The expensive ones being Oasis‘s “Stop the Clocks” triple vinyl set and Paul Weller‘s “Dragonfly” EP. A couple of Peter Blake covers are getting hard to find; “Brand New Boots and Panties: Tribute to Ian Dury“and Paul Weller‘s “Stanley Road” both on LP. Even Brian Wilson‘s “Gettin’ in over My Head” is becoming rare on vinyl. However, if you want to add some of the special, limited editions of Eric Clapton‘s or Paul Weller‘s releases you’ll have to shell out a bit more.

Some art galleries have cottoned on to the fact that artists who are in demand have designed record covers and advertise these as limited edition art works–often calling them “lithographs”. Damien Hirst is one artist’s covers I have seen advertised by galleries. His “Use Money, Cheat Death” 12″ single with his famous Kate Moss portrait was released in a numbered edition of 666 copies. Galleries have been advertising copies for £500+, but I’m not sure anyone buys them.

Another gallery has advertised two (the yellow and pink covers below) of the five singles Damien Hirst and Jason Beard designed for the group The Hours as limited edition lithographs at an asking price of £133 for the pair.

The yellow version of “Ali in the Jungle” is now difficult to find but the remaining four covers in the series can still be found at reasonable prices.

Probably the most reasonably priced covers in my collection are those by Klaus Voormann. Even his early covers in the “Pioneers of Jazz” series from 1960 are still affordable.

His very first official cover–for The Typhoons (“Walk, Don’t Run“, a cover of The Ventures hit)–is impossible to find as is a mythical album of jazz tunes that I have only heard about but never seen.

It seems there’s no limit to what a record cover with art by a famous artist can cost. So desirable covers seem to be not only beautiful, but are even a good investment. 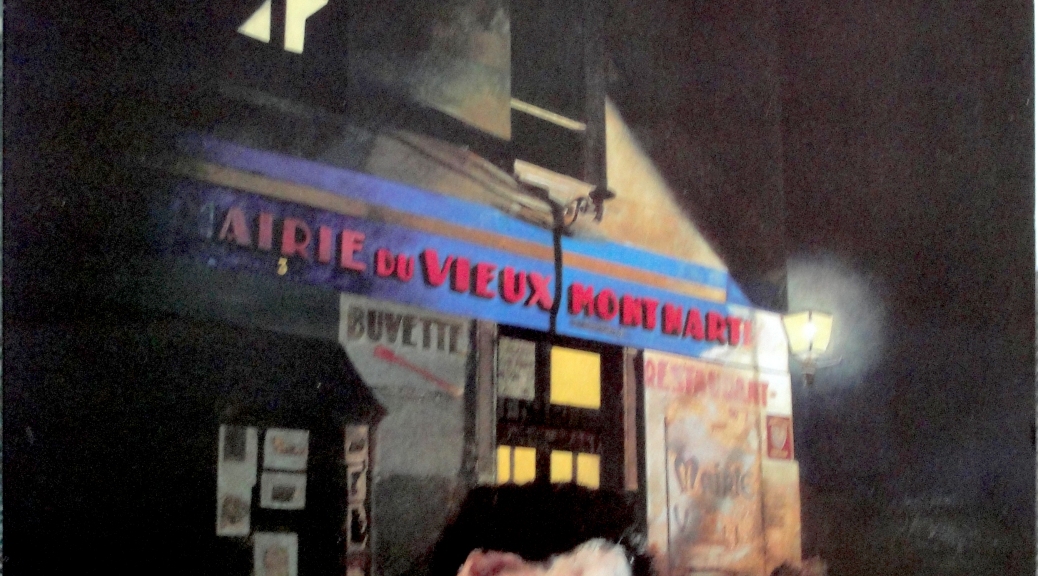 As I have said before, I have stopped saying that my collection of a particular artist’s record covers is complete, because, just as soon as I write this, someone points out a cover I have missed. I was SO sure I had all of Sir Peter Blake‘s record covers that I was prepared to boast that, in fact, my collection WAS COMPLETE, when a moderator at rateyourmusic.com, Harlou123, notified me that he had a Classics For Pleasure album from 1981 with a cover painting by Peter Blake!

Well, I had to find a copy–luckily that wasn’t too difficult as the LP wasn’t too old, and had obviously been quite popular when it was released. The album paired George Gershwin‘s “Rhapsody in Blue” with his “An American in Paris” and had Ferde Grofé‘s “Piano Concerto in F” as a filler.

The cover art really conjures up the feeling of Paris! Thank you Harlou123 for the tip off!

Harvey’s of Bristol, importers of sherry apparently commissioned six British artists to each illustrate a cover for a classical release on the Classics for Pleasure label. I usually associated Classics for Pleasure as a low-price label that reissued classical works at mid price. However, these six recordings were made by winners of the 1981 Leeds Piano Competition (sponsored by Harvey’s of Bristol) specially for the label and the cover art was newly commissioned for each album. Peter Blake‘s contribution was number 6 in the series. Other artists who painted the covers included Patrick Heron and David Inshaw. I have not been able to identify the remaining painters.

While I specifically collect cover art by five designers — the artist known as Bansky, Sir Peter Blake, Damien Hirst, Klaus Voormann and Andy Warhol — sometimes other artists I admire produce record covers. Over the past couple of years a number of such covers have found their way into my collection.

As readers of this blog may recall, I described Lady Gaga‘s “ArtPop” album cover designed and photographed by Jeff Koons in my post about Stockholm’s Spritmuseum’s 2014 exhibition entitled “ArtPop“. A copy of the double vinyl has found its way into my collection. 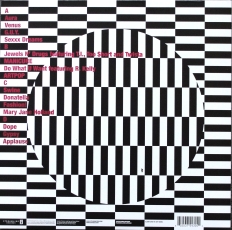 The Unholy Two “Kutter/Porkys“: The Unholy Two is a hardcore/punk trio from Columbus, Ohio, who have released two albums to date. The members are Chris Lutzko, Bo Davis and Adam Smith.

There’s a story behind how I came to find this single. Sometime in the 1990s I saw a painting by American artist Chuck Close (born 5th July 1940). It was a large portrait of a man’s face made up of tiny units. I was fascinated. I’ve looked at Close‘s work in galleries and museums since. He is both a painter and a photographer. In 1988 he suffered a spinal artery collapse (whatever that means) and was paralysed. He now paints with a special support on his arm enabling him to hold a brush. He has ascribed is interest in painting portraits to his prosopagnosia or inability to recognise faces. Neurologist and author Oliver Sachs was a fellow sufferer from prosopagnosia. In 2005 Close took a series of photographs of a nude Kate Moss and it was when I was compiling my list of record covers with portraits of Kate, that I stumbled across this single. I first saw it in an Ebay ad which described the cover portrait as being by Richard Avedon (15th May 1923-1st October 2004). I soon found out who the artist actually was.

Paul Simon “Stranger to Stranger” LP album released in 2016 has an insert with Close‘s portrait of Simon.

The lyric insert with Chuck CLose’s portrait of Paul Simon and a close-up of the study.

These are the only two covers with art by Chuck Close that I have thus far been able to identify. Does anyone know of any others?

Sonic Youth‘s “Sonic Nurse” was originally released in 2004. It was reissued in July 2016 on heavyweight vinyl with the original cover paintings by Richard Prince (born 6th August 1949). Prince is both a photographer and a painter and often uses other peoples’ work as his starting point. I have not been able to find any other record covers painted or photographed by Richard Prince, but he recorded a CD in 1985 entitled “Loud Song” and a limited edition 12″ was released with cover art by Sonic Youth‘s Kim Gordon.

Mattias Alkberg is a poet and guitarist and most recently a journalist. He has fronted a number of bands, starting with the Bear Quartet and Mattias Albergs BD. More recent constellations  include Mattias Alkbergs Begravning and Mattias Alkbergs Södra Sverige. He released the “Skända flaggan” in 2013 as a limited edition blue vinyl 7-inch EP, and the 12″ EP “Epitafium” was released as a limited edition for Record Store Day in 2014; I think 1000 copies were pressed. Mattias Alkberg lives in Luleå in northern Sweden and chose the celebrated painter Karin “Mamma” Andersson for the artwork for the double-sided poster cover . Karin “Mamma” Andersson also hails from Luleå.

Mattias Alkberg also used two other paintings by Karin “Mamma” Andersson on the front and rear covers of his 7″ EP “Skända flaggan” released in 2013.

Richard Avedon‘s photographs have graced the covers of many albums, ranging from Simon & Garfunkel‘s “Bookends” to Allen Ginsberg‘s “Kaddish” and including albums by Cher, Sly & the Family Stone, Barbra Streisand and The Fugs.

In 1999 The Weaklings, a punk band from Portland, Oregon, released their ninth single “It’s so Criminal/Real Cool Time” and chose Richard Avedon‘s famous photograph of Andy Warhol‘s abdomen showing the scars after operations to remove the bullet shot by Valerie Solanas on June 3, 1968. Solanas fired three shots at Warhol, but the first two missed. I used to own several records with Avedon‘s cover photographs, but now only have The Weaklings‘ single. The reason being that I include this cover in my collection of Andy Warhol cover art.

I do not doubt that other covers with art by artists/photogtaphers I admire will find their way into my collection. I’ll keep you posted as and when any new covers arrive.