I have been involved in a series of unauthorised Banksy retrospective exhibitions over the past five years. This started in 2016 when the Italian cultural foundation Associazone Metamorfosi planned a major retrospective exhibition of the work of the artist known as Banksy to be held at the presigious Palazzo Cipolla on Rome’s Via del Corso between 24th May and 4th September 2016. John Brandler, a gallery owner who specialises in street art, knew of my collection of record and CD covers with cover art by Banksy and recommended to the curators Stefano Antonelli, Francesca Mezzano and Acoris Andipa including mey records and CDs in the exhibition. The exhibition, called War, Capitalism & Liberty, was divided into sections illustrating these three themes.

Then in 2019 the Fondazione Metamorfosi contacted me again asking to borrow my Banksy collection for a new exhibition to be called Il Secundo Principio di un artista chiamato Banksy [The Second Principle of the artist known as Banksy]. The exhibition was held between 23 November and 29 March 2020. An exhibition catalogue was produced for this show.

Metamorfosi decided to that the exhibiiton should move to a series of exhibition halls in Italy and Switzerland, first to Ferrara, then to Parma and later to Basel and Lugarno. The title of the exhibition changed to Un artista chiamato Banksy for the Ferrara show.

The following exhibitions in Parma, Basel and Lugano were all titled Banksy: Building Castles in the Sky and used the same catalogue design.

These exhibitions included paintings, prints, books, posters, sculpture and, of course record and CD covers illustrating all aspects of Banksy’s art, with the exception of paintings on walls. The curators have been careful to point out that Banksy has not been involved in these unauthorised exhibitions and that no works from buildings are included as ownership of such works is unclear.

I had the priviledge to attend the openings of the War, Capitalism & Liberty and the Il secundo principio di artissta chiamato Banksy exhibiitons. The Covid pandemic prevented me visiting the Ferrara, Parma, Lugano and Basel exhibitions.

After Lugano, curators Stefano Antonelli and Gianluca Marziani, together with Fondazione MetaMorfosi transferred the exhibtion to New York, in the former International Center of Photography building at 250 Bowery. This was still called Banksy: Building Castles in the Sky and a new catalogue was produced for the show.

The New York exhibition opened on 28th May and will run until 31st December 2022. It was a thrill for me to be invited to the opening and to meet the curators, who had published a book of Banksy’s art in Italian in 2021 and could present an English language version at the opening of the New York show.

Twenty-nine of my record covers and 16 CDs are on show at the exhibition.

The exhibition proivides a great overview of Banksy’s art and includes is most famous images including his Rage: Flower Thrower, Girl with Balloon , Turf War and I Fought the Law, among many others.

There is a cultural organisation in Italy called Azzociatione Metamorfosi that arranges educational art exhibitions ranging from Michaelangelo to Caravaggio and most recently the artist known as Banksy. Metamorfosi have engaged art experts Stefano Antonelli, Gianluca Marziani and the British gallerist Acoris Andipa to curate an unauthorised exhibition of the Banksy’s art currently called Banksy: Building Castles in the Sky. The organisers are careful to point out that the exhibition does not involve Banksy himself nor does it include works removed from buildings or public spaces.

The exhibition was first shown at the Palazzo Cipolla in Rome in 2016 when it was called War, Capitalism and Liberty. The current exhibition opened in Genoa in November 2019 and was called The Second Principle of Banksy. It moved to several Italian cities during 2020 and thereafter to Basel and finally to Lugarno in Switzerland metamorphosing into its present form as Banksy: Building Castles in the Sky. The exhibition opened at the former Institute of Photography, 250 Bowery, New York, on May 28th 2022 and will run until the end of the year.

In 2021 Antonelli and Marziani published their book Banksy in Italian and published it in English in May 2022 to coincide with the opening of the New York exhibition. The book, Simply entitled Banksy is published by Rizzoli/Elektra (ISBN 978-0-8478-7276-3).

It is, as far as I know, the first authoratative and critical analysis of Banksy’s art produced by independant art experts. It runs to 240 pages and is profusely illustrated in colour. All the best-loved Banksy images are, of course, included along with many less well-known ones. There’s Girl With Balloon, Rage: Flower Thrower, Monkey Parliament all arranged along a timeline so the reader can follow the artist’s progression. It’s reasonaby priced at £29.95 / $40. 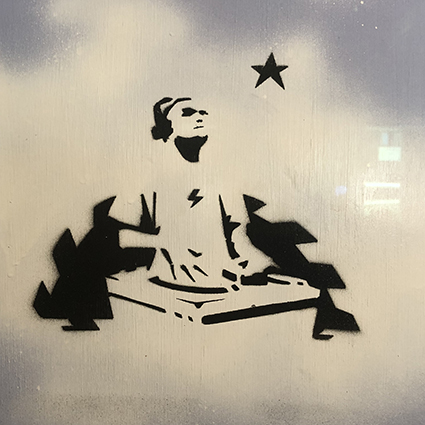 There’s a wonderful (unauthorised) Banksy retrospective in New York at the moment. It’s called Banksy — Building Castles in the Sky and includes paintings, prints, posters, a sculpture, books and a selection of record and CD covers showing the many facets of Banksy’s art. It’s at 250 Bowery, on the Lower East Side, until December 31st 2022.

But there is one piece in particular that I’ve never seen before. It’s an early painting on board that was intended to be used as the cover art for a Massive Attack album (for Mezzanine I wonder?) However, it was never used.

This piece, 71 x 74 cms is dated 1998-1999 and is one of the first works one sees when entering the exhibition. It portrays Robert del Naja as a DJ in front of a circular saw. The sky background — reminicent of Yoko Ono’s cover for John Lennon’s Imagine album or the cloud on the cover of the Plastic Ono Band’s Live Peace in Toronto 1969 album — is painted while Del Naja is stencilled onto the background.

The star that Del Naja seems to be staring at recurs on Banksy’s Zapatista footballer from 2001.

Thus, the Cloud DJ image should be added to a discography of Banksy art on record, CD or cassette.