I really felt as though I had exhausted the subject of record covers showing Kate Moss‘ portrait in my previous post. No sooner had the proverbial ink dried than two more covers appeared. The first is a 7-inch single-sided EP by American punk/hardcore/grunge band Vomit, entitled “Kate Moss” on the Give Praise record label.

Now, a search of Discogs will reveal more than ten bands that have used the name Vomit. The Vomit in question seem to only have released this one “Kate Moss” EP.

Then I was reading about the two CD and one DVD set of Bryan Ferry‘s 2010 “Olympia” album. I already have the limited edition Vinyl Factory LP version of this, that includes the cover portrait of Kate Moss but without the text–obviously intended to be framed and hung on a teenager’s wall. I hadn’t considered the box set as I felt it probably wouldn’t add anything to the LP version. Well, I was wrong. The 40-page book that houses the discs contains many more photos from Adam Whitehead‘s sessions for the album. The DVD has an interview with Bryan Ferry on the making of the “Olympia” album and the “You Can Dance” video as well as a video of behind the scenes activity in the making of the “You Can Dance” video.

The pictures are stunning. Here are a selection:

The CDs and the DVD included in set come in card covers, two of which have different cover photos from the LP and deluxe box.

CD1 has the album cover photo, while CD2 and the DVD cover have different photos. You will have to examine the covers of the CDs to spot the very subtle difference (hint look at Kate’s right hand).

And just when the thrill of finding the box set sort of settled, I came across an Ebay ad by my least favourite seller Majestic Music & Art. I consider this seller to be quite ruthless in his (I presume it is a “he”) price-setting. Many years ago, I bought a couple of albums from Majestic Music & Art that were poorly packaged and arrived damaged. They would not discuss a return or a refund and I promised myself never to buy from them again. But in mid-March 2017 they posted this ad for a copy of the Luke Fair remix of Primal Scream‘s (and Kate Moss‘) “Some Velvet Morning” (the old Lee Hazlewood classic). This single normally comes in a plain black generic cover, but Majestic Music & Art advertised a copy with Kate Garner‘s famous 1992 portraits of an 18-year-old Kate Moss affixed to front and back covers. 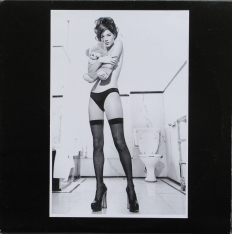 “Some Velvet Morning” remix 12″ with one of Jane Garner’s 1992 portraits of Kate on front and rear covers.

Despite my promise to myself never to buy from Majestic Music & Art, I did buy the 12″ single to add to my collection. I knew of Kate Garner‘s Kate Moss portraits from an exhibition of Russell Young‘s recent screen prints at London’s Halcyon Gallery. Russell Young’s portraits are really wonderful–some are as big as 200 x 200 cm and covered in diamond dust, so they really sparkle! 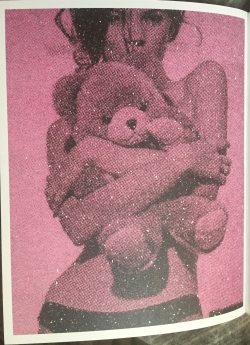 Kate Moss‘ name crops up in music as a songwriter and artist–several tracks by other artists/bands are entitled “Kate Moss“. Examples include Arab Strap‘s 1996 album “The Week Never Starts Around Here” that contains a track entitled “Kate Moss“, but there is no picture of her on the record cover. German rocker Maximilian Hecker‘s 2003 CD “Rose” also has a song called “Kate Moss” as its first track. Again, there is no portrait of her on the cover. I don’t suppose these will be the only songs called with this iconic title.