Here I go again! I regularly boast that I have complete collections of Banksy’s, Peter Blake’s and Klaus Voormann’s record covers (well, I usually admit to lacking one Klaus Voormann cover, but still) only to find out that none of these boasts is true.

I recently found the cover to an unreleased 7″ single version of DJ DangerMouse’s “Keep It Real” cover (you can read about it in an earlier blog post). Now it seems there are a couple of other Banksy covers that I had previously never heard of. I’m not going to say more at the moment, but you can be sure that I shall return to this subject in due time.

My blog posts on the latest record cover art by Peter Blake have only mentioned the various vinyl, CD and cassette versions of The Who’s latest album “WHO“. I had bought two limited edition issues of the album: the 45 rpm double LP version with extra single-sided 10” single “Sand” sold via The Who Store and the HMV “Nipper1” double LP. A mate in Liverpool popped in to see Sir Peter while on a recent visit to London and got him to sign both the 45 rpm and HMV covers for me as well as a copy of the reissued “Stanley Road” album (signed previously by Paul Weller himself.) 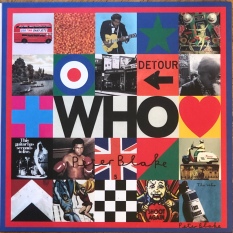 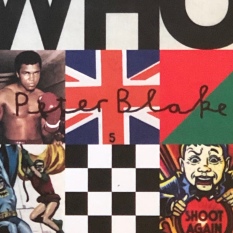 Then I saw an ad for Dr. John Cooper Clarke’s 2018 book and CD “The Luckiest Guy Alive” whith its cover portrait of Cooper Clarke by Peter Blake and Blake’s classic alphabet tiles for the album title and artist’s name.

So, naturally, I ordered a copy of the book and CD. I wonder if my Peter Blake collection is complete now?

Then I saw an ad for The Blues Band’s album “Itchy Feet” that stated that the cover was designed by Klaus Voormann. I immediately went through my Klaus Voormann collection only to find that I had missed this album (though I had bought the other two Blues Band albums when they came out, and even seen the band live.)

While going through the Voormann albums, I noticed that my copy of Gary Wright’s “Extractions” LP was in less than mint condition. It is a U.S. promo copy with a large cut-out hole through the top right corner of the cover, so I looked on Discogs for a better copy and saw that the U.K. original was released in a six panel poster cover that I had never seen.

So I ordered both the “Itchy Feet” and the “Extractions” records to “complete” my Klaus Voormann collection even though I’m still missing at least one of his covers. I was lucky that the “Itchy Feet” LP was one of the limited edition pressings that included the large poster of the band in action.

I have to say that I feel I’m nearer to having complete collections of these three cover artists. I’ll just have to keep a lookout to see if I find further missing covers.