Klaus Voormann has a greater claim to being the fifth Beatle than most. If I had to rank the contenders, I’d put Brian Epstein on the top of my list, followed very closely by George Martin and then, probably, Klaus at number 3. After all, he knew them and became friends with them in Hamburg. He lived for a while with Ringo and George and was the one John phoned when The Beatles needed a cover for their seventh, at the time unnamed, album that became “Revolver“. Later Klaus played on many recordings with individual Beatles (including George Harrison‘s “The Concert for Bangladesh“) and was a founder member of the Plastic Ono Band. So other “contenders” for the title of the fifth Beatle such as Pete Best or Murray the K (Murray Kaufman, born February 14, 1922 – died February 21, 1982) don’t come close.

Quite apart from being an accomplished musician, Klaus Voormann has pursued a successful career as an illustrator. He is a master at portraying The Beatles as they were in the sixties and has produced posters of Lennon and McCartney in the Abbey Road canteen, John Lennon and Paul McCartney. The latest set of Beatles portraits appeared on the covers of the August/September 2016 German music magazine “Good Times“. This issue had five different covers. 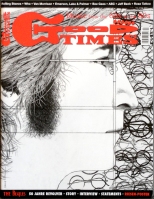 The magazine contained an interview with Klaus on the 50th anniversary of “Revolver” and each magazine included an A2 poster of the cover portrait.

There was even a promotional brochure that pictured all five magazine covers.

While researching Klaus‘ book “The Birth of an Icon-Revolver 50” (see my previous post on this) I stumbled across another of his books that I had previously missed completely. In 2005 he published “Four Track Stories“, an illustrated paperback describing The Beatles‘ time in Hamburg. 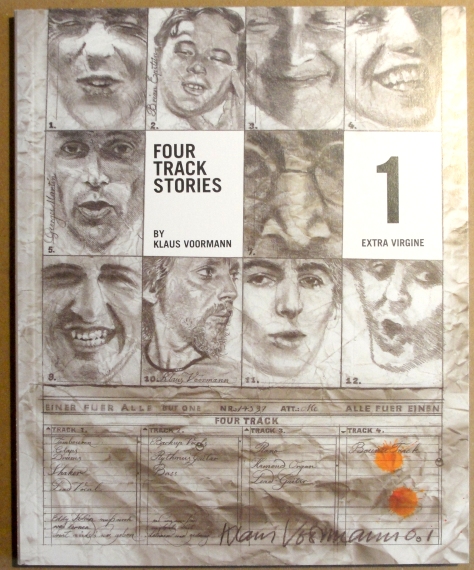 This first edition is autographed on the flyleaf:

I ordered my copy directly from Klaus‘ website and it arrived in less than a week. There was a discussion about the shipping cost and Klaus refunded the shipping together with an autographed postcard with a personal message:

In our mail exchanges I asked if he knew of any record or CD covers that he had designed that were due for release and he asked which covers I already had. So I mailed him my list of 80 of his of his record covers with an apology that I only had 78 of them. So far he hasn’t replied about any new covers in the pipeline.