As a child, my parents frowned on popular culture – unless it was Sinatra or musicals. Comics were a definite “no-no”. So I had to sneak looks at The Eagle, Beano, Dandy and others. I only caught up on Asterix and Tintin much later. This probably explains why, today, I am fascinated by comics; the parental disapproval as well as the obvious evolution of comics as high art–from Roy Lichtenstein onwards.

Mauri Kunnas is is a great illustrator and is well-know as the author of many children’s books. His books are usually populated with animals dressed in human clothes and up to all sorts of adventures. Less well-known is the fact that he plays in a cover band and loves 60s and 70s British bands like the Beatles, Stones and Hollies.

Last year, on a visit to Helsinki, my wife and I went into publishing house Otago’s shop and I saw Mauri Kunnas‘s recently published “Beatles With an A“, in Finnish (original title “Piitles – Tarina erään rockbandin aikutaipaleesta.“). It was a comic strip history of the early life of the Mop Tops up to and including the recording of “Love Me Do“. There was also a version in English  Great research and clever drawings–obviously I had to have it!

Kunnas has also written a companion book on the Rolling Stones entited “Mac Moose ja Jagge Migreeni tapaus” which, strangely, only seems to be available in Finnish and Portuguese but not in English!

Then for my most recent birthday my daughters, well conversant with my interest in Andy Warhol‘s art,  gave me “Where’s Warhol?” by Catherine Ingram & Andrew Rae. This large-format book is made up of a series of twelve scenes each populated by hundreds of people. These range from Studio 54 through places and times before Andy was born (such as Marie Antoinette’s execution and Michelangelo painting the Sistine Chapel) to Basquiat in Washington Square. The clever drawings are by Andrew Rae and many celebrities are recognisable in each double spread picture. The game is to identify all of them and to find Andy among the host of figures. Catherine Ingram has written explanatory essays at the end of the book with a key to let one know which celebrities are included in each scene.

The latest addition to my comic library is Klaus Voormann‘s “Birth of an Icon-Revolver 50“. His history of how the Grammy-winning cover for The Beatles‘ seventh album was created. Klaus calls it a”graphic novel”, obviously a misnomer as it is as near as you can get to a true story. I am an ardent admirer of Voormann‘s draughtsmanship and–as readers of this blog will know by now–have spent endless hours searching for records with cover art by him. 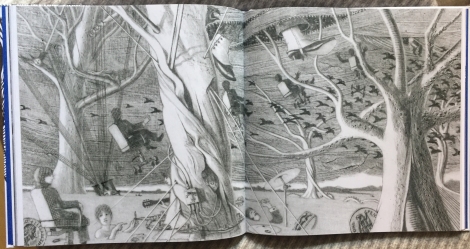 The quality of the drawings is amazing. Just imagine (pun intended) how long it must have taken to produce the 32 pages of drawings for the graphic novel–and (if I have counted correctly, a grand total of 166 separate drawings throughout the book! Even with the advantage of digitalising backgrounds so that he only needed to redraw the foregrounds in some pictures, that’s a massive amount of work! Anyway, “Birth of an Icon-Revolver 50” is a genuine treasure.