Klaus Voormann celebrated his 80th birthday on 29th April 2018. He has given his many fans a belated birthday present in the form of a book reviewing his more than 60-year career as a graphic artist. He calls the book “It Started in Hamburg” and is available from his website. 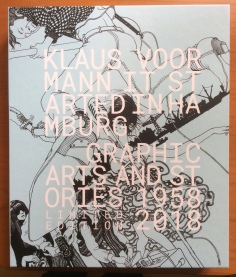 The slipcase for the limited edition of “It Started in Hamburg”. 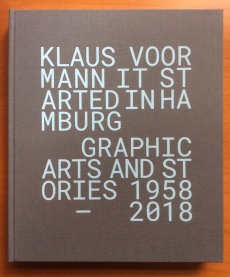 The cover for the limited edition of “It Started in Hamburg”.

Klaus Voormann‘s career started at art school where he obviously developed a special interest in record sleeve design, making–as he states in “It Started in Hamburg“–with a fascination for the cover art of Blue Note Records. The book features a number of mock ups of record sleeves by jazz artists including Sonny Rollins, Jimmy Guiffre, Sonny Stitt, Bob Cooper and Bud Shank.

Voormann was truly the right man in the right place in 1960s Hamburg. Together with Astrid Kirchner he stumbled on The Beatles playing Hamburg’s Star Club, befriended them and showed one of his record cover designs to John Lennon. He played in the German group The Eyes, designing the cover of one of their singles and designed the cover for British band The Typhoons‘ German release of The Ventures hit “Walk Don’t Run“.

In 1962 he was asked to design the covers for a series of twenty jazz EPs called “Pioneers of Jazz” on Deutsche Grammophon’s German subsidiary Coral Records. At about the same time he drew the cover for an LP entitled “Ver nie in Bett Programm gemacht“, said to be a recording of a radio programme.

Voormann moved to London in the mid sixties. In March 1966 John Lennon phoned him and asked him to design the cover for The Beatles’ album “Revolver”, for which he was to win a Grammy. Besides graphic design, Voormann continued his musical career joining Manfred Mann‘s band in 1966 when Paul Jones left and Mike D’Abo took over the role of singer. He designed the cover for the band’s 1966 album “As Is“, released in October that year.

“It Started in Hamburg” summarises Voormann‘s career. The 221 pages are divided into two sections: open the book one way and the text is in English. Turn the book over and you can read it in German. However, there does not seem to be any duplication of pictures. A few of Voormann‘s early attempts at producing jazz covers (see above) are included along with thirty-four of his published covers. There are pictures of the covers of ten of the “Pioneers of Jazz” series, along with one of the two Bee Gees covers (“Idea“)he designed and details of how cover art for The Beatles “Anthology” series came about. The limited edition comes with a USB with excerpts from Klaus’s film “Making of The Beatles “Anthology” artwork”, and little additions like an original drawing from the serial “Revolver–Birth of an Icon” and some film negatives.

His poster design and the design for his recent book “Revolver–Birth of an Icon“, about the design of the cover for “Revolver“, are also represented. His graphic self portrait and portrait of John Lennon remind me of some of Chuck Close‘s portraits, graphically breaking down their faces.

“It Started in Hamburg” is an important addition to any collection of Klaus Voormann’s art–my copy of the limited edition of turned out to be No. 3/80. I offer my sincere congratulations to Klaus on his 60 years of art and music. May he continue for many more!

I’ve divested myself of the majority of my concert and art posters but have kept a few that I particularly like. When I sold my record and poster collection, the buyers, knowing that I collect Klaus Voormann’s record cover art promised me a signed, numbered edition of Klaus Voormann’s portrait of John Lennon. I collected it the other day.

It joins my signed Banana poster from 1981-2. Nationalmuseum in Stockholm presented a huge exhibition of record cover art from 27th October 1981 – 17th January 1982. This was the year before the CD was introduced so all covers were of vinyl releases. I still have the exhibition catalogue from the Nationalmuseum’s exhibition – which has the Velvet Underground & Nico LP design on its cover. The catalogue has an eight page review of Warhol’s cover art and pictures six covers (two Kenny Burrell, one Johnny Griffin, Two Rolling Stones and – the obligatory – Velvet Underground & Nico) written by Bo Nilsson. This must be the first anaytical review of Warhol’s record cover art that I ever read. Of course, only a few warhol covers were recognised in 1981, so the choice of these six is hardly surprising.

I felt that the covers in the exhibition were arranged rather haphazardly and I wrote a three-page letter to Nationalmuseum suggesting how the covers could have been better presented. I did not expect a reply, but one came by return informing me that the exhibition was moving to Umeå’s Bildmuseum and that the museum would contact me to discuss which covers should be included. They did, too! and about thirty of my covers were included in the Umeå exhibition.

In 2008, as discussions about putting on the “Happy Birthday Andy Warhol” exhibition in Piteå were underway a copy of the poster for the Nationalmuseum’s record cover exhibition came up for sale. This was a one-off and beautifully signed by Andy Warhol in pencil. So it was included in the Piteå exhibition and has since then hung on my wall.