The largest exhibition of the works of the artist known as Banksy opened at the Palazzo Cipolla in Rome on 24th May–4th September 2016. The exhibition is organised by the Fondazione Terzo Pilastro – Italia e Mediterraneo and curated by Stefano Antonelli, Francesca Mezzano and Acoris Andipa and collects works from private collections including paintings, prints, sculptures and – not least in my humble opinion – record and CD cover art and a book cover. There are no works removed from walls.

Acoris Andipa, director of the Andipa Gallery in Knightsbridge, London, which has sold many works by the artist known as Banksy, contacted me in March 2016 to enquire whether I would be willing to lend my collection of records and CDs with Banksy’s cover art to the exhibition. He had been tipped off about my collection by fellow gallerist John Brandler to whom I had once sold some covers. I was flattered by the invitation and agreed.

In return for the loan, my wife and I would be invited to the private showing of the exhibition on 23rd May.

Coincidentally, we had previously booked a trip to Rome at the end of April and we had the opportunity to meet Andipa’s chief assistant Chiara Tognacci with exhibition curator Francesca Mezzano who showed us round the Palazzo Cipolla. We could see the exhibition hall, which was in a very raw state before the carpenters and painters started preparing for the exhibition.

We flew into Rome after lunch on Monday the 23rd Maj and were picked up by limo and driven to our hotel. we had time for a short walk, and relax for an hour and dress for the viewing. Just before 6 p.m. a car collected us and drove us the short distance to the Palazzo Cipolla. We were checked in and given tickets to admit us to the reception after he viewing.

We were greeted at the exhibition by the head of the Fondazione Terzo Pilastro, Prof Emmanuele F. M. Emanuele and a group of officials together with Acoris Andipa, who presented us as lenders to the exhibition! We were then free to view the show and were impressed by the breadth of the exhibits, which were arranged by themes – war, capitalism and liberty.

The orange area is the entrance hall with several classic Banksy works including four portraits of Kate Moss. The black are is the “war” room that leads to the green area and the first room on the left contains my records and CDs and Nick Cave‘s book “And the Ass Saw the Angel” with its Banksy cover. 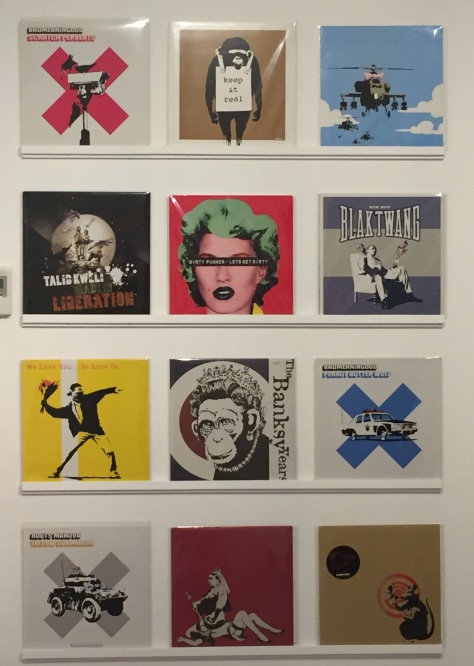 Thus 44 records and 28 CDs are on display – all from my personal collection. There was only one small problem. The curators had intended that the records and CDs would be protected by a plexiglass cover. However, this was not ready for the exhibition’s opening, so an armed guard was on duty in the room!

I would like to thank Acoris Andipa for including my collection in this wonderful exhibition.