My blog is usually about record design and some of my favourite cover designers. This post is about an icon who appears on record covers.

According to a dictionary an icon is either: a devotional painting of Christ or another holy figure, typically executed on wood and used ceremonially in the Byzantine and other Eastern Churches, OR
a person or thing regarded as a representative symbol or as worthy of veneration.

I don’t suppose anyone would argue that supermodel Kate Moss is a 21st Century icon. Her face is on the covers of fashion magazines and there are coffee table books of photographs of her. She has even appeared on record sleeves. The first one that I have been able to identify is Dirty Funker‘s “Let’s Get Dirty” which used Banksy‘s Kate Moss portrait from 2005

Apparently Kate Moss bought one but it was stolen in 2010 together with other Banksy works that she had bought.

Dirty Funker‘s use of Banksy‘s Kate Moss’ portrait on his record sleeve was not authorised by Banksy. But hey ho, who cares? A first pressing showed only Moss‘ face with no title or other text, while a second (more common) had a black Dymo tape with the record’s title across Moss‘ eyes on the front and across her mouth on the rear.

The February 2008 number of TAR Magazine contained a photographic essay of Kate Moss. And the magazine’s cover was adorned with Damien Hirst‘s portrait of Kate, with the right side of her face dissected down to the muscles. 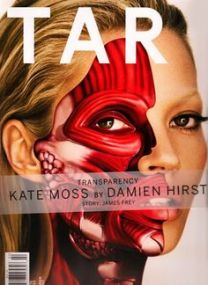 The following Year Hirst released a single-sided 12-inch single in an edition of 666 copies pressed on white vinyl that used the TAR Magazine picture on its cover.

Bryan Ferry released his thirteenth album “Olympia” on 25th October 2010. The album was released as a CD, CD with DVD, a collectors’ edition with extra tracks as well as a limited edition LP. He seems to have been besotted with Kate as the album and five singles’ covers taken from it all bear Kate‘s portrait. There is a video of the photo shoot for the cover photo

Thus I have been able to find ten covers with portraits of Kate Moss released in less than 10 years. I think this fulfills the second definition of an icon. Perhaps I have missed a cover or two. Readers are very welcome to let me know of any I have missed.