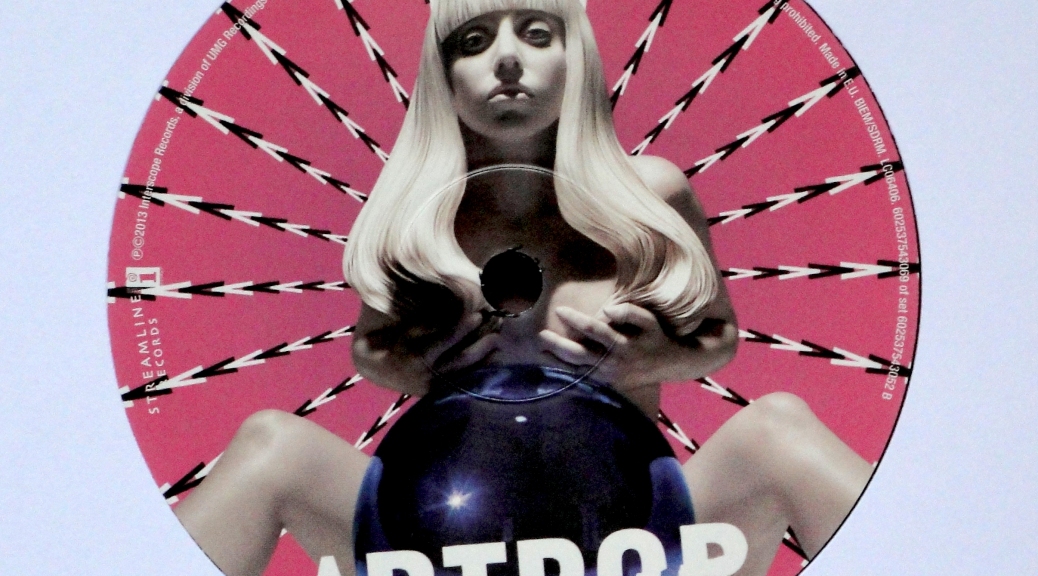 Cindy Sherman and Jeff Koons  are two contemporary artists working in totally different media. Cindy Sherman (born 19th January 1954) is a photographer who specialises in self portraits in which she disguises herself in costume and in various situations. She is considered a conceptual artist.

I have thus far managed to find six record, video and cassette covers with cover art by Cindy Sherman.The earliest recording I have found that has one of her photographs on its cover was for the television production “Two Moon July” which featured the music of Laurie Anderson, David Byrne (with whom Cindy Sherman had a relationship from 1991 to 2005), Philip Glass and others. The programme was released on VHS in 1986 and on Laserdisk the following year with Cindy‘s photograph of the Empire State Building on the cover.

In 1988, one of her self portraits was used as the cover art for a cassette of visual artists talking. The cassette was released as Tellus Magazine #21 entitled “Tellus #21: Audio by Visual Artists“. Tellus was a bi-monthly cassette magazine that was founded in New York in 1983.

Sherman was involved with the female band Babes in Toyland in the 1980s and even appeared in one of their videos. Her photographs appeared on the covers of two of the group’s records “Fontanelle” (1992) and “Painkillers” (1993). 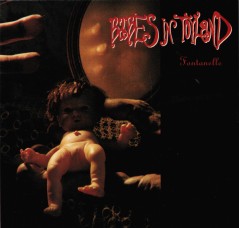 Babes in Toyland’s 1992 LP “Fontanelle” and 12″ “Painkillers” with cover photos by Cindy Sherman. 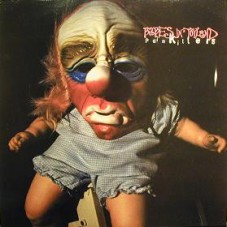 The punk band Cloudburst released two singles. The first, released in France in 1999 was a purple vinyl, three-track 7″ EP entitled “Love-Lies-Bleeding” and had a Cindy Sherman painting as its cover art.

The latest cover i have been able to find is a five-track, single sided, yellow vinyl 12″ EP called “No More Crazy Women” by tenor saxophonist Arthur Doyle. I’ll be returning to Arthur Doyle in my list of Jeff Koon‘s cover art.

There only seem to be three record or CD covers with Jeff Koons’ art. Or that is all I have hitherto been able to find.

Eli and Edye Broad have built up a magnificent collection of American postwar art which is housed at The Broad at 221 S. Grand Avenue, Los Angeles and is open to visitors. The Los Angeles County Museum of Art hosted an exhibition of 100 works from the Broad Collection from 7th October 2001 until 6th January 2002. The exhibition was called “Jasper Johns to Jeff Koons: Four Decades of Art from the Broad Collection“. In conjunction with the exhibition a CD was released called “John Cage to David Byrne: Four Decades of Contemporary Music“. The exhibition later transferred to The Corcoran Gallery of Art in Washington DC (16th March-3rd June 2002).

The CD was a compilation of 13 tracks by artists from David Bowie (“Rock ‘n’ Roll Suicide“) to John Cage (“Atlas Eclipticalis”) via The Velvet Underground (“Femme Fatale”), Dizzy Gillespie (“Be Bop”) and Klaus Schulze (“Floating”).

The second release with Jeff Koons‘ art is another Arthur Doyle record. This time another single-sided, two track 12″ single with cover that shows Koons‘ print “Donkey 1999” from 1999 produced in an edition of 99 copies. The cover, once again, has two corners cut off.

And the third Jeff Koons cover is the best known. Lady Gaga‘s “ArtPop” from 2013. For this cover Koons acted as photographer. 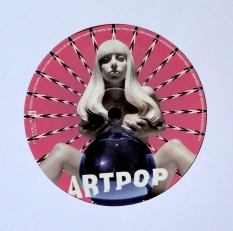 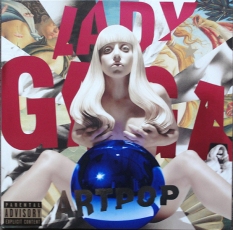 I will keep looking out for more covers with art by Sherman and Koons and will probably update this post sometime in the future.

Most of my posts have been about record covers bearing Andy Warhol’s art. But, just as a reminder, I also collect record cover art by four other artists. I have an almost complete collection of Damien Hirst’s record covers, including the highly collectible “Use Money, Cheat Death” one-sided single released on his own label. 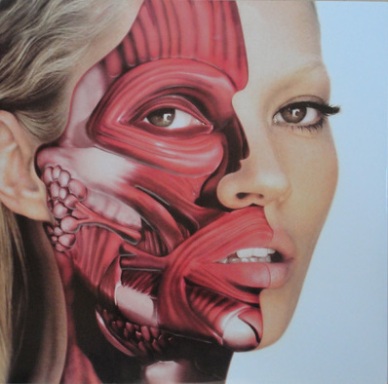 This image first appeared on the cover of the February 2008 number of TAR Magazine. The record was released on white vinyl in a numbered edition of 666 copies. Damien Hirst’s most recent covers are for the British band Babyshambles’ 2013 releases “Sequel to the Prequel” (LP) and (so far) the two vinyl singles from the album “Nothing Comes from Nothing” and “Fall From Grace”: 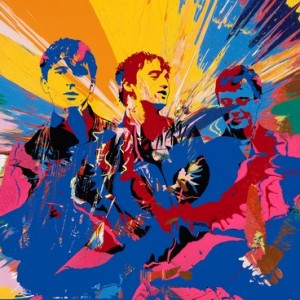 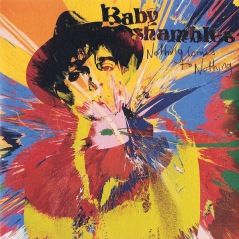 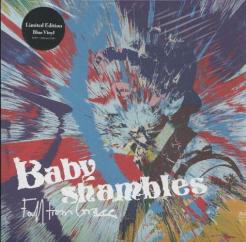 These covers all show examples of Damien Hirst’s spin paintings.

My friend Daniel Brant at the A and D Gallery in London, knows I collect Klaus Voormann’s record cover art and he recently induced me to buy a poster by Klaus Voormann that I had never seen before. It is a print of a drawing of Paul McCartney and John Lennon in the canteen at Abbey Road during the recording of “Revolver”: 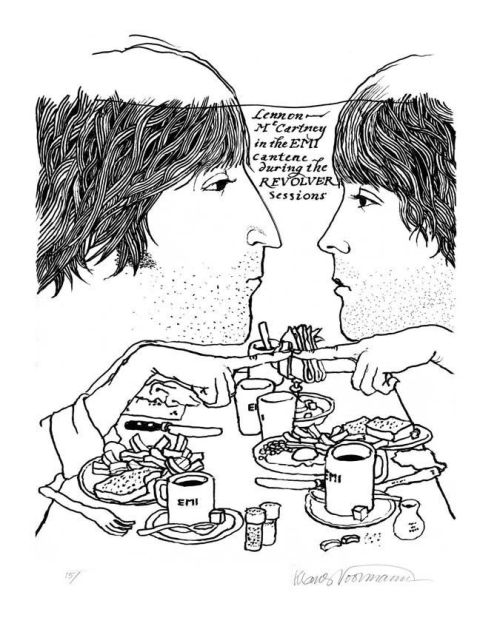 While on the subject of Klaus Voormann – I have a 12″ single of George Harrison’s single “When We Was Fab” from 1988. And just a few days ago I stumbled on the promotional issue of this release which comes in a limited edition box with a poster and a card, which I had not seen before, so I snapped it up! The illustration of the front of the box, and on the single itself, is another fine Voormann drawing – somewhat in the “Revolver” style. 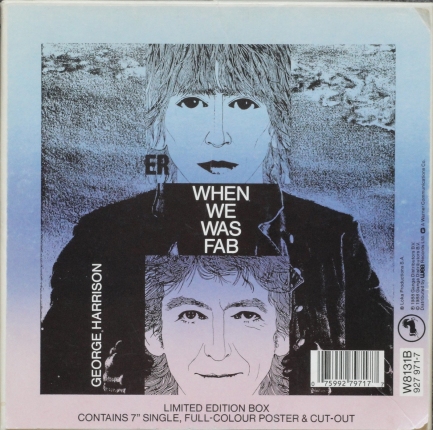 Fellow Warhol Cover Collectors Club member Kevin Kinney suggested I get hold of Lady Gaga’s 2013 album “ArtPop”, whose cover was designed and photgraphed by Jeff Koons. Now I do not collect Koons’ covers but – because of the ArtPop exhibition currently on show in Stockholm – I decided I would buy this album.

This is the cover’s inner spread with photographer Koons photographing Lady Gaga.