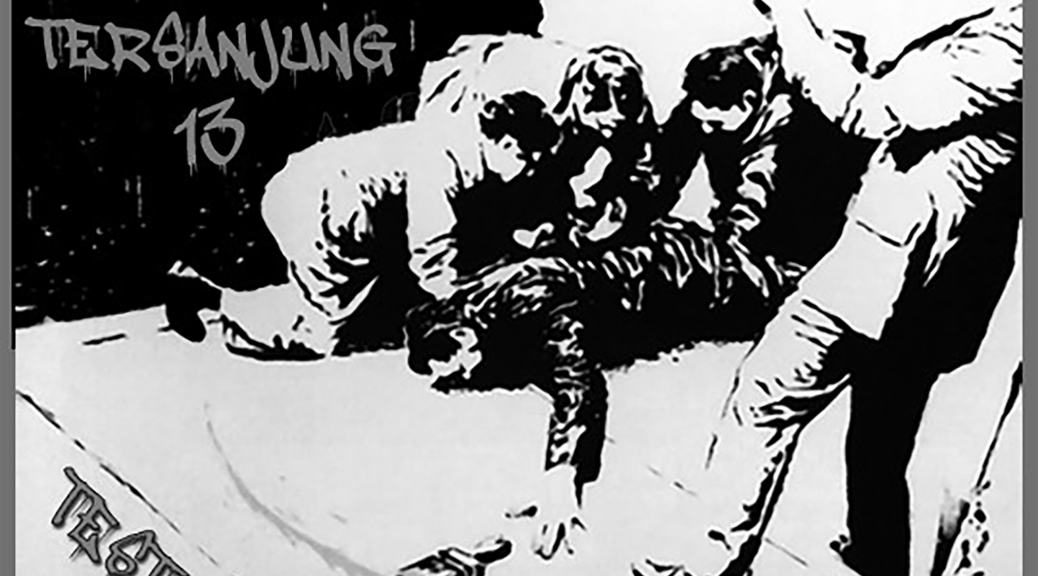 My friend Tasso von Haussen keeps me up to date on record and CD covers with Banksy connections. He recently sent me pictures of four 12″ releases on the Bow Wow label by Buckfunk 3000 (2 Much Booty, 2004), Product.01 (The Loud EP, 2004), Speed Baby – aka Tim Wright (Taken / Lurcher, 2004) and Bass Kittens (Rise of the Machines, 2005) that all use a modification of Banksy’s Dog with Rocket Launcher design.

Next he found a test pressing of a split EP by Embalming Theatre / Tersanjung XIII (Mommy Died – Mummified / Hellnoise) on the Rotten to the Core label. The six-track EP was released in 2013 in a limited edition — 100 copies on clear vinyl and 400 on black vinyl.

However, the test pressing had a different cover.

According to Discogs, there are fifteen copies of the test pressing and, after being in contact with the band, I have to admit that the chances of finding one are probably close to zero. The cover image is, of course, a modification of Banksy’s I Fought the Law print. I was surprised to learn from my discussions with the band that they had no idea this was a Banksy design. I then contacted the band’s record label, Rotten to the Core Records to ask who designed the cover of the test pressing. Here is the reply from Robert Janis, the company’s owner: It’s a Banksy piece. I’m the one who designed the test press cover. He even sent a copy of Banksy’s original artwork.

Another friend supplied me with the original image from which Banksy created his print:

So, in order to keep my Banksy collection as complete as possible, I need to get hold of a copy of this test pressing… The only sure way seems to be to make my own. I asked for scans of the cover and record label and, after a considerable amount of work, this what I came up with.

I decided to make a limited edition of ten numbered copies, plus five artists proofs. The scan I had to base my design on was somewhat overexposed and I thought there was a thin white border round the greyish outer border. A later, better photo, showed that there was no white border. My first attempt was in pure monochrome, as shown above. However, a more recent, clearer photo, supplied by Tasso von Haussen, shows that the cover has a bluish tinge. I’m not sure how much the plastic protective cover controbutes to the bluishness, though.

I’m still trying to work out how to add the blue overcoat to the black an white image. In order to distinguish my reproductions from the origials, I have made proper sleeves that the record slips in and out of, rater than the single, foled sheet of paper that the real test pessings have.

I decided that it would be fun to use real Embalming Theatre / Tersanjung 13 EPs and give them white labels. So I got back in touch with the band and ordered more copies. Bear in mind that these are a limited edition of 400 black vinyl EPs, so now I own about 2,5 per cent of the edition.