Occasionally serendipity strikes. A week ago I went to Stockholm’s Moderna Museet to see the retrospective exhibition of Marie-Louise Ekman’s art. In true Banksy style I left thru’ the gift shop and while there I noticed a new book about Andy Warhol’s early career–“Adman-Warhol Before Pop“, published b the Art Gallery of New South Wales, Australia, to coincide with their exhibition of the same name, which ran from February to 28th May 2017.

I couldn’t resist a quick flick through just to see if there were any record covers featured. I was excited to see quite a few of Warhol’s earliest covers, including “A Program of Mexican Music“, “The Story of Moondog“, with Julia Warhola’s beautifully querky calligraphy, Johnny Griffin’s “The Congregation” and sketches for the Tennessee Williams LP, Billie Holiday EPs and one of the “Progressive Piano” designs. There was also a picture of one of Julia Warhola’s early attempts to write the cover for “The Story of Moondog” album. 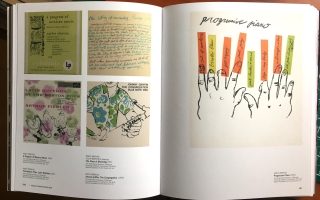 But what I wasn’t prepared for was:

Having made reproductions of the “Night Beat” box set, I immediately recognised that this was the design for a similar box. While there exists a physical example of the “Night Beat” set, discovered by famous Warhol collector and author, Paul Maréchal, that has a record company catalogue number, as far as I know no physical example of the “Voices and Events” box exists and so I cannot know if it was actually released. I don’t even know if it was intended for a box of seven-inch EPs or for LPs, but I suspect the former.

So–all you Warhol cover collectors out there please start searching! Meanwhile I’m gonna try to make me a copy.