I don’t really know why I haven’t done it before. I felt kind of forced to make a list of my covers with art by Banksy before the collection was shipped off to Rome for the “War, Capitalism & Liberty” exhibition which opened in May 2016. I had a basic list of my collection of covers with Andy Warhol art, but I needed lists of Peter Blake‘s, Damien Hirst‘s and Klaus Voormann‘s covers. Finally last month I  sat down and started compiling these lists and was surprised to find that there are seventy-six covers with Klaus Voormann‘s art!

Then, just as I had finished my list I saw an advert for a book entitled “Albums with Cover Art by Klaus Voormann“. Well, naturally, I thought someone else had done the work for me. So I bought it. What a disappointment! It only lists eleven covers designed by Klaus and included a number of covers not designed by him. None of his covers designed for German artists are mentioned and none of his early jazz covers. There are several pages devoted to the recording of “Concert for Bangladesh” with pictures of the original box set and a reissue, neither of which were designed by Voormann! The book, produced by Books LLC, Wiki Series, Memphis, Tennessee, is thus a complete waste of money. Well, not quite–the book did show a picture of Wet Wet Wet‘s 2007 single “Too Many People” which has a cover drawing by Klaus Voormann.

I already have Wet Wet Wet‘s CD “Timeless“, both as the official CD and a promo version with two different Voormann covers. After a bit of research I found the there were two CDs of the “Too Many People” too. 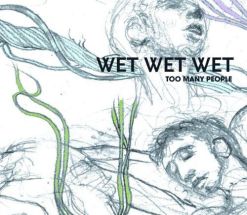 Then Thorsten Knublauch, an expert on The Beatles‘ early days in Hamburg, who sold me my original copy of the Paddy, Klaus & Gibson 10″ compilation EP tipped me off about a CD by Albert Lee & Hogan’s Heroes entitled “Fretterning Behaviour” with classic Voormann art.

Almost simultaneously, I saw a seven-inch single advertised on Ebay of Klaus Voormann‘s song “Lu Le La Lu“, which he recorded for Apple in the sixties but which was never released. A group called Wishful Thinking released the song as a single in 1974. Now http://www.aisforapplebooks.com released a limited edition of 1000 copies (250 of which were autographed by Klaus) featuring a remastered version of Klaus‘s recording of the song backed with Wishful Thinking‘s version. The single, in a gatefold cover with Klaus Voormann‘s self portrait from 1960 on the front cover, is sold in aid of a charity for refugees.

At the same time another Ebay seller was selling a 1974 Jimmy Smith album entitled “Black Smith” and stated that the cover was by Klaus Voormann. I was very surprised to see this and started searching for confirmation that the cover art was by Klaus as I didn’t feel that it was typical of his work. It didn’t take long to find a picture of the rear cover with clear credit to Voormann. So I had to order a copy, which wasn’t too difficult as there were many for sale at very reasonable prices. 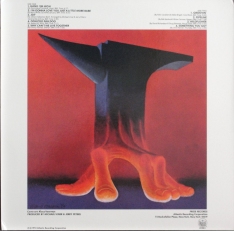 Suddenly there were these five Klaus Voormann covers, which I had missed! I could have almost done without the book on Klaus Voormann‘s record cover art, although it did tell me about the Wet Wet Wet singles. But, apart from that, I’m sure I could do a better job myself.