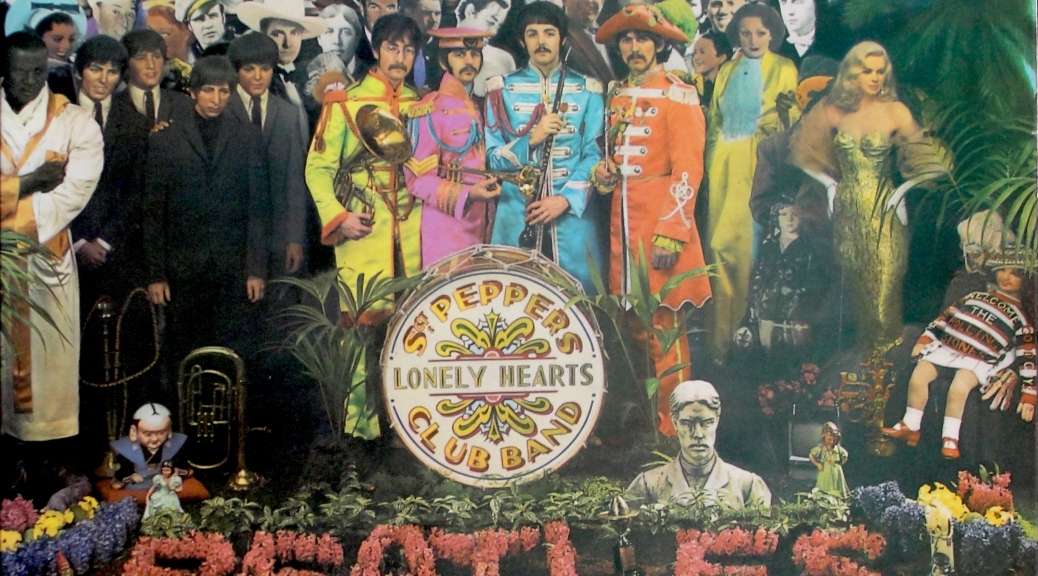 This is a year of musical anniversaries. One could say 1967 was the year popular music became ART – in capital letters. Seminal albums by The Velvet Underground, The Jimi Hendrix Experience, Cream, The Who, The Doors, Captain Beefheart’s Magic Band, The Jefferson Airplane and Traffic to name just a few of my favourites were released that year, but none had the advanced expectations of The Beatles’ “Sgt. Pepper’s Lonely Hearts Club Band”. The album, released on June 1st 1967 had been preceded in February, by the double A-sided single “Penny Lane/Strawberry Fields Forever” and the Beatles, despite rumours of drug-taking, could seemingly do no wrong.

May had been a musically exciting month. I had been to The Saville Theatre on the 7th to see the Jimi Hendrix Experience (they played eight songs and I wrote the playlist into my programme). Five days I went to the Pink Floyd’s “Games For May” concert at the Queen Elizabeth Hall–the first time I smelled the sweet smell of hash being smoked. I still have the ticked stub from that concert; unfortunately my Hendrix programme was sold to help finance my move to a flat.

I used to take time off from my studies and visit One Stop Records in South Moulton Street, where they sold records imported from America. An imported LP would set med back £3/15/0d–an enormous sum for a student. The guys behind the tiny counter suggested albums I might like and, at the end of May, put a copy of The Doors first album into my trembling hands and sent me to the listening booth to hear it. Even the cover design fascinated me. I was totally floored by the album and bought it on the spot.

The BBC had announced that the whole “Sgt. Pepper “album would be played at midnight and many sat glued to their trannies to hear it. I listened together with my flatmates. I don’t remember exactly when I bought “Sgt. Pepper”; probably in Moorlands record shop across the road from our canteen, but it would have been within a few days of its release. I was careful to buy a stereo copy as my parents had bought me a stereo gramophone for my 21st birthday, the previous year.

The album had an interesting side effect. It introduced me to pop art. I had seen articles on poster design from San Francisco and had started to design my own posters for college dances and lectures. These were heavily influenced by the psychedlic art used my artists such as Wes Wilson, Victor Moscoso, Stanley Mouse and Rick Griffin. I started going to art galleries and exhibitions–and buying records with great cover art.

So, I suppose I could say that “Sgt. Pepper’s Lonely Hearts Club Band” was the start of my addiction to record cover art. I am thrilled to own a copy autographed, not by The Beatles, but by both Sir Peter Blake and his co-designer Jann Haworth.