Okay, I have to admit that I have a soft spot for Henrik Berggren, former frontman of Swedish indie band Broder Daniel, who disappeared from radar after the band’s 2008 farewell concert in its native Gothenburg.

Henrik and fellow school comrade Daniel Gilbert formed Broder Daniel in 1989 and the band was joined by Håkan Hellström (who went to the same school as Henrik and Daniel, and would become an enormously popular artist in his own right) on drums and later by Johan Neckvall and Anders Göthberg (guitar; 9th October 1975-30th March 2008). Broder Daniel released its first album “Saturday Night Engine” as a Digipak CD in 1995. Gilbert left the band after the “Saturday Night Engine” tour and was replaced on bass by Teodor Jensen (who would go on to form the band The Plan). Hellström left the band in 1994 to join Honey Is Cool.

Broder Daniel‘s tours were infamous for alcohol and drug use and for unreliability that made concert-bookers wary of booking the band. In particular Henrik Berggren misused a variety of drugs together with alcohol and often performed ‘under the influence’.

Broder Daniel toured the album over the summer of 1998 and were scheduled to play Hultsfred’s Festival in June 1998. I was one of the festival doctors and the medical team received a phone call at about 10 a.m. on Friday 12th June from an hotel in Vimmerby, about 30 kms from Hultsfred, to say that a member of a band that was due to play at 15.15 h that afternoon was unwell and could we send a doctor. “No.” We couldn’t send a doctor as the medical crew was based in the festival area. However, Vimmerby had a general practice near the hotel, and, it being Friday, it was open and we suggested that the band member went there.

At about 1 p.m. the band arrived at Hultsfred’s Pampas stage and I was called to examine the singer (Henrik Berggren) who was not at all well. We learned that he had consumed a fair amount of alcohol and various uppers and downers and felt he couldn’t perform. I had two hours to get him shipshape for the show. He was mainly complaining of stomach pains so I gave him a Zantac tablet dissolved in water and suggested he rest until it was time to go on stage. I checked in on him every half hour or so and he seemed to brighten up. By 3 p.m. he was up and about and could do the hour-long show!

I had brought a copy of the limited edition “Broder Daniel Forever” LP with me and after the band had done their thing I asked them all to sign it. Håkan Hellström refused to believe it was my album and said he thought it must be my daughter’s! Actually, my daughters had bought it for me for my birthday a couple of months earlier.

Fast forward to July 1999 and a new festival in Stockholm called Stockholm Open. Broder Daniel were again scheduled to appear. I was in charge of the medical crew for this festival and had managed to recruit many of the members of the previous year’s Hultsfred crew to help out. While I was out patrolling the festival area Henrik Berggren came to the Medical tent and asked Kajsa, one of the nurses, if “his doctor” was at the festival. Kajsa knew he meant me and reported that he had been asking for me. But this time he was only looking for reassurance and didn’t need any medical attention. As the Festival ended early on Sunday morning, I waited outside the medical tent for my daughters, who had been at the festival with me, and their classmate Tobbe who would be coming with us back to town. We were talking about Henrik and I said that I really felt fatherly towards him (“jag får faderskänslor”. Tobbe, who was gay, immediately replied “Jag får sambokänslor” (I feel he could be my partner).

I met up with Henrik at a couple more festivals in the ensuing years and we went to after festival parties  and chatted. He always struck me as a gentle soul with quite a wide education.

However, after Broder Daniel‘s farewell concert in Gothenburg in 2008, just months after the band’s guitarist Anders Göthberg had died, Broder Daniel disbanded and Henrik disappeared. Apparently, he developed chronic tiredness syndrome and has lived as a recluse. But then in March 2017 posters appeared all over Stockholm announcing a new solo album by Henrik due for release on May 5th!

The album, “Wolf’s Heart” will be released on CD and LP. There will be a standard black vinyl LP and at least five limited editions of 300 copies each on coloured vinyl; pale blue, pink, red, violet and yellow. Thus there are at least six variations of “Wolf’s Heart” on vinyl. The five coloured vinyl versions amount to 1500 copies. I’m not sure how limited the black vinyl version will be but Henrik is obviously counting on selling at least 2000 copies. He will probably succeed, knowing the growing cult following his old band 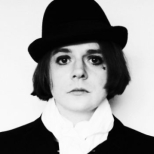 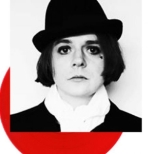 I have an unwritten rule that I will not start collecting any new artists’ records, but rules are made to be broken,and I have ordered copies of all the variations of “Wolf’s Heart” on vinyl!