Some time ago founder member of the Warhol Cover Collectors Club, Kevin Kinney, found a variant of the “MTV – High Priority” LP cover that few, if any, of us knew existed. Instead of the red shading to the MTV-logo on the front, the shading was yellow and the titles along the top of the front cover were in black print instead of white, red and blue. I’ve been checking every copy that I have seen on Ebay looking for a yellow version but to no avail. Then one came up a week or so ago and I was about to “buy it now” when it disappeared. Fellow collector Niklas L had seen it first and nabbed it! But, having sent Niklas some of my fabricated “Progressive Piano” and other covers for his collection he very generously thanked me by sending the yellow “MTV – High Priority” album together with André Heller’s “Stimmenhögen” LP. Even this turned out to be unusual. Two versions were listed on Rate Your Music – one on the Electrola and one on the HMV label. The copy Niklas sent me was also on the HMV label, but with a completely different catalogue number from those listed on RYM.

The only reason to have the Heller LP is the fact that the booklet inside the gatefold has a little Warhol drawing on one page (pictured above). In 1981 Heller was photographed by Warhol and two Polaroids from this session were recently sold by Christies.

The picture in the lyric booklet is probably Warhol’s portrait of Heller which, judging by Heller’s pose with arms crossed must have been done on that occasion. It fits with the Polaroids, which show him bare to the waist, arms crossed and wearing leather trousers. I suppose Heller chose to include the drawing to show that Warhol had done a portrait of him. I do not suppose that Warhol did the drawing specifically for this record cover. One could argue that the Swan Lake and Daphnis & Chlöe albums from 1955 with Warhol drawings fall into the same category, but Warhol did those drawings specifically for the albums and they illustrate the ballet content. However, one could say that the portraits on the covers of many albums definitely listed as being Warhol covers (Aretha Franklin, Billy Squier, Paul Anka, Liza Minnelli, John Lennon etc.) were not painted specifically for the record covers. So do I include the Heller album as a bona fide Warhol cover or not? 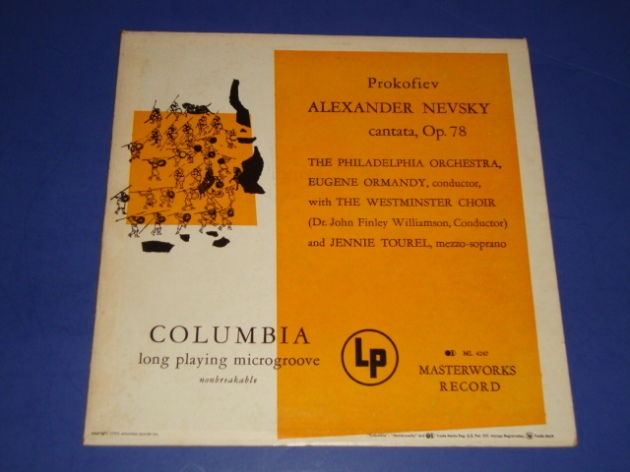 An unusual copy of Prokofiev’s “Alexander Nevsky” LP came up on Ebay last week. This had the original 1949 cover design but with orange colour blocks. I have previously seen blue, green and pink versions, but never an orange one. and I wonder if the colour variations were later pressings of the album. This one definitely is. The record has Columbia Records’ “6-eye” label rather than the Dark blue Columbia Masterworks label used since the introduction of the LP in 1948. According to Ron Penndorf’s Labelography the grey”6-eye” label was introduced in 1955 and phased out in 1962. As may be seen from the label picture, the designation “Unbreakable” appears to the left of the spindle hole, indicating – again according to Labelography – that this is a later pressing; probably late fifties or early sixties. I find it fascinating that Columbia chose to keep the original cover design from 1949 on this repressing rather than commission a new cover.