While collecting Andy Warhol‘s record cover art, I became aware of Jean-Michel Basquiat‘s art and have admired his record covers, but my interest in them has stayed there. I discovered them too late to be able to afford collecting them. I recently discovered Robert del Naja’s (A.k.a 3D’s) record cover art. He has provided several beautiful sleeves for The Vinyl Factory for a couple of Massive Attack‘s 12″ EPs and a collaboration with Jean Michel Jarre and, as I have written about in a previous post, the book “3D–The Art of Massive Attack“. I recently discovered that del Naja had also provided the cover art for U.N.K.L.E.‘s “War Stories” album from 2007 and that there is a limited edition four album set with a book. 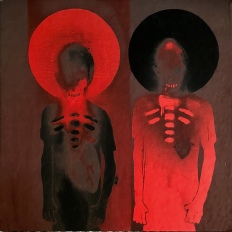 The front cover of the “War Stories” box set. 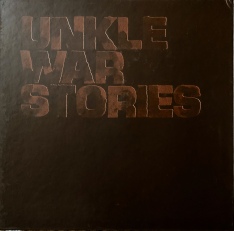 The rear cover of the “War Stories” box set.
Del Naja had also provided cover art for some Mo Wax albums, two of which I used to own–The “Headz2A” and “Headz2B” compilations. 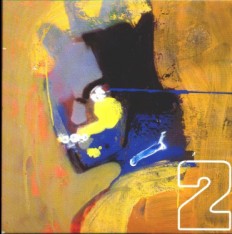 Unfortunately, these two box sets went when I sold the bulk of my record collection.

Robert del Naja was born in Bristol, U.K., on 21st January 1965 (though I’ve seen sources that say he was born in 1966). He is red/green colour blind, which obviously affects how he sees the colours of his artworks. He was interested in music and was impressed in the late seventies by the cover art of records on the Crass label and by covers on releases by The Clash–some of which included stencils allowing the owner to decorate t-shirts or even their bedroom walls. He became interested in street art after seeing examples of SAMO‘s (Jean-Michel Basquiat‘s) work in New York magazines and was impressed by pop art of Andy Warhol and Keith Haring.

He started stencilling street art in Bristol in 1982 and was further motivated by the 1983 film “Wild Style” that introduced New York graffiti artist Futura 2000. And an impressive number of street artists appeared in Bristol in the nineteen eighties, including 3D, Inkie, Ian Dark & Z Boys, Nick Walker and, towards the end of the decade, Banksy. At the same time del Naja began rapping together with Claude Williams at Bristol’s Barton Hill Youth Centre a.k.a The Dug Out (or Dugout). In about 1983 a loose group called the Wild Bunch formed that included Robert del Naja, Grant Marshall, Nellee Hooper, Claude Williams (aka Willy Wee), Milo Johnson (DJ Milo), Andrew Vowles and part-time member Tricky. The group toured widely and towards the end of the eighties DJ Milo left, preferring to remain in Japan after the group had toured there, and the band disintegrated with del Naja, Williams and Vowles leaving to form Massive Attack.

Robert del Naja, or more correctly, 3D has continued to develop his design and graphic output providing cover art for many records and CDs not only by Massive Attack but even for U.N.K.L.E. and has produced diverse prints, though he prefers to give them away rather than sell them.

The magazine VNA (Very Nearly Almost) No. 26 had an article on 3D and produced a special limited edition of the issue. Both editions had covers by 3D. 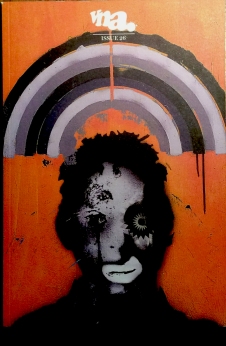 The standard edition of VNA magazine No. 26.