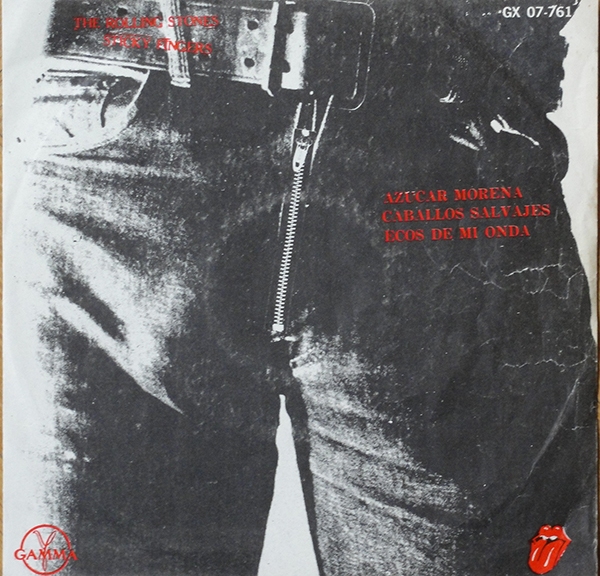 Part one of this series on the sources of Andy Warhol’s record cover art dealt with the images on the covers of Rolling Stones bootleg albums. It seems logical to devote the second part to the three official Rolling Stones covers designed by Andy Warhol. Well, actually, there should be four official album covers that he designed for the Stones – but the design for their 1969 Greatest Hits album has been lost after Mick Jagger (was said to have) refused it. The three covers are (of course):
– Sticky Fingers (1971)
– The Rolling Stones (promotional EP) 1977
– Love You Live (1977)

Sticky Fingers
In 1969 Andy Warhol is said to have suggested to Mick Jagger at a party that he would like to design a record cover with a working zip. Jagger remembered this in 1969 when recording the Stones’ first album to be released on their own label, Rolling Stones Records. He wrote a letter to Warhol expressing his satisfaction that Warhol had agreed to design the cover.

So, what about the photo? There is uncertainty about who the model was and even discussion about who actually took the photograph. It is usually credited to Warhol. The identity of the model has never been confirmed, though many assumed the model was Jagger, it has often been rumoured to be either a hanger-on at the Factory, Warhol’s studio, named Joe Dallesandro, or Factory artist and designer Corey Tippin.

The album package was designed by Craig Braun who realized there had to be an extra layer of cardboard to protect the record from the zipper; that layer features another Warhol shot of a different man, possibly the twin brother of Warhol’s boyfriend and assistant Jed Johnson or journalist Glenn O’Brien, this time in his jockey shorts which (barely) contained him. The picture of a man’s pelvic region clad only in a revealing pair of white underpants was stamped with Andy Warhol’s stamp. Sticky Fingers was the first Stones record to show the  tongue logo, which has often erroneously been credited to Warhol. It was in fact designed by Ernie Cefalu and his version was used for much of the merchandising and was the design originally shown to the band by Craig Braun. However, the design used for the album was done by John Pasche.

While the cover of “Brown Sugar / Bitch”, the number one single from the album, in most countries had a portrait of the group taken by Peter Webb. However, in Mexico the single and an EP used the Warhol photographs.

There was also a shaped picture disc that used the classic Warhol image.

The Rolling Stones (promotional EP)
This four track EP was released in 1977 as a trailer for the forthcoming “Love You Live” double album. Warhol had taken a number of Polaroid photographs of the band members licking or biting each other or just sticking their tongues out. There seem to have been about twenty-five polaroids and these were printed on tablecloths used at the

“Love You Live” launch party thrown by the Stones at the New York’s club Trax, September 27, 1977.

The EP was released as a black vinyl EP in a picture sleeve bearing four of the Polaroid pictures.

A picture disc EP also appeared with the same catalogue number. However, this was probably a bootleg.

Love You Live
Released on 23rd September 1977 was a double album with a gatefold sleeve designed by Warhol. His original design did not include the album title or the band name, which apparently were added by Mick Jagger much to Warhol’s annoyance. The front cover picture is of Mick Jagger biting what looks like a child’s hand – probably that of his daughter Jade. The inner sleeves show two profiles, possible Charlie Watts,  with extended pink tongues painted in.

Epilogue
Both “Sticky Fingers” and “Love You Live” have become classic record cover designs and rank with Warhol’s banana cover for “The Velvet Underground & Nico” as his best known covers.