Stockholm has many museums and most are worthy of a visit. Remarkably, there is even a Spritmuseum – a museum devoted to alcholic beverages. Spritmuseum is home to the Absolut Art Collection a collection of over 800 works by renowned artists celebrating (or advertising, depending on how you view the works) Sweden’s Absolut Vodka. The collection started in 1986 when Andy Warhol painted his protrait of the Absolut Vodka bottle. 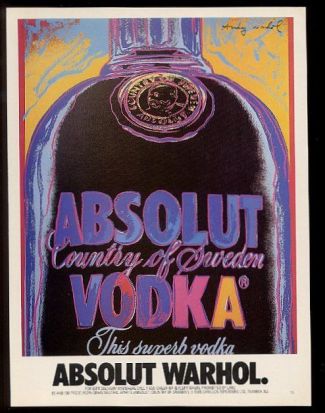 Warhol recommended Keith Haring to produce his version of the Absolut Vodka bottle and from those initial works the collection started and has grown steadily.

The ArtPop exhibition combines works by some of these artists with record cover designs that each made. The exhibition took its title from Lady Gaga’s latest LP “ArtPop” with cover art by Jeff Koons. 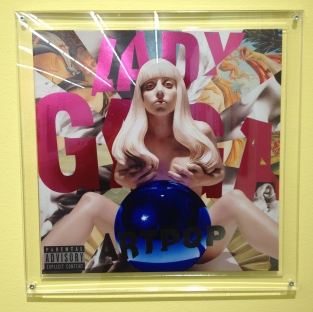 But the exhibition proper starts with some of Sir Peter Blake’s covers – well, actually, with the exception of the Band Aid’s “Do They Know It’s Christmas” 12″, just posters for the covers: there is (obvioulsy) “Sgt. Pepper’s Lonely Heart Club Band”, Oasis’s “Stop The Clocks”, Brian Wilson’s “Gettin’ In Over My Head”, Paul Weller’s “Stanley Road”, Madness “Oui, Oui, Si, Si, Ja, Ja, Da, Da”and Ian Dury’s “Brand New Boots & Panties” all surrounding Blake’s photo selfportrait with Absolut Vodka bottle, surrounded by dead great artists. Once again, and to my annoyance, the Sgt Pepper cover is only credited to Peter Blake. Jann Haworth, Blake’s ex-wife and the co-designer, is “conveniently” forgotten. But they both received Grammys for the design.

The following artist is Jan van Hammersfeldt with his huge wooden Absolut Vodka work surrounded by covers of The Jefferson Airplane’s Crown of Creation” (probably my favourite Airplane album) and posters for a Jimi Hendrix and a Velvet Underground concerts. van Hammersfeldt’s cover for The Stones “Exile On Main Street” is in a separate monter in the centre of the exhibiiton.

There are covers by Ed Caraeff, including “Trout Mask Replica”, Captain Beefheart’s magnum opus. Others by Damien Hirst, Stephen Sprouse,  Then there is a wall with “influential” cover art, ranging from Elvis’s debut LP via Joy Division to Kraftwerk – perhaps fifty covers in all.

At the far end of the exhibition hall is a wall almost completely devoted to Andy Warhol. Sixteen record covers ranging from Artie Shaw’s Both Feet in the Groove” to Paul Anka’s “The Painter” via John Wallowich and The Velvet Underground & Nico.I would, perhaps, have placed these covers in a different order – probably chronological to make Warhol’s artisic development more obvious.

Most interestingly, is the photo of Warhol’s original drawings used for the RATFAB cover. According to the explanation Calle Häggkvist, the band’s basist, played the single for Warhol when his grandfather took hm to meet the artist at The Factory. Though Warhol was apparently indifferent to the songs, he agreed to do the cover art.

The RATFAB cover is in a separate monter. 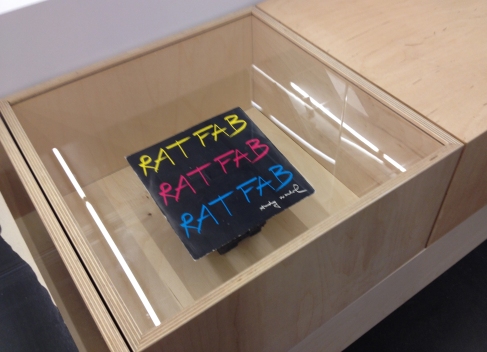 As are further copies of “Sticky FIngers”, “Love You Live”, John Cale’s “Academy in Peril”, Ravel’s Daphnis & Chlöe” and The Velvet Underground & Nico” (However, in my excitement, I forgot to check whether or not it was a “Torso” cover.)

There was also a turntable and many of the records from the covers on display thjat could be played by exhibition visitors. I played Joe Strummer and the Mescalino’s “Rock Art and the Xray Style” (cover by Damien Hirst) – the title seemed to fit the exhibition.

In summary, I found the exhibition well worth a visit. The idea of coupling works from the Absolut Art Collection with record covers by the same artists is inspired. I hope the exhibition will become popular. I will definitely visit it again.